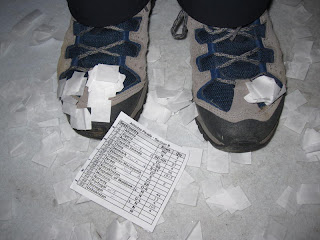 Going back a few days to the Opening Ceremonies, here's a pic to prove I was there!! These are my feet on the floor of the stadium, covered with paper sneaux and that's my athletes' seating roster for the teams I was seating in the Opening Ceremony. (All seventeen of them!)

Last night there were four medal presentations. Two took place in Vancouver at the stadium and two were in Whistler and streamed live to the stadium so we could watch them in real time. It was also Nova Scotia's night to shine. The opening acts were Buck 65 and a group called DRUM.

Buck 65 sang this song called "Way Back When" and it was so catchy I had to download it from iTunes. Drum was fabulous-it's a fusion of First Nations, Celtic, Acadian and Black Canadian musicians, drummers, singers and dancers. I can't tell you how wonderful it was-it's something you have to see for yourself. I especially loved the Acadian section. (I have a fondness for fiddle and accordion music.) At one point, there were women sitting on chairs, tapping (with tap shoes on) and playing the spoons, which was fabulous. The music of Nova Scotia just makes you want to get up and dance. DRUM is so spirited and delightful-it's a joyous celebration of life and culture.

And then, the Barenaked Ladies performed. It's the first time I have heard them live and it was a good time. Ed Robertson is funny. I have to say though that when they were playing old favourites, I really missed hearing Steven Page chime in, where he used to. It just seemed wrong somehow. Kevin Hearn has kinda/sorta taken Steven's place, but I didn't think his voice sounded strong enough or that it blended as seamlessly as Steven's did. It's just not what I was expecting, though what can you do when one of the lead signers leaves the band? :/

It's been interesting being a "blue coat" and commuting. I've certainly had a ton of people come up to me en route every day and ask for assistance. Of course, I always stop and try to help in any way I can. Mostly it's questions about how to get from here to there or seeking information about where they can go see entertainment or local landmarks. It's kind of fun to play host and have an excuse to engage with people whom I would not normally interact with. I really like the idea that even if only for a brief time, our city has become a global village.

I had planned to post more photos today, but my son made off with the camera-he went to see women's hockey tonight, so they'll have to wait till tomorrow.

I will be having an Olympic themed giveaway shortly, so keep reading!
at 9:02 am

Lelainia,
I love reading your updates. I have a friend who's driving buses at the Olympics. She's been posting video journal entries on her facebook page and it's been fun to read. Can you take your flip to interview fellow volunteers, and visitors you encounter? What fun.

Love the pic of your feet with the paper snow and the list of teams with their seating assignments. A *perfect* document of Being There.

So thankful you are taking us behind the scenes with you.....

I watched the Opening Ceremony and thought it was absolutely beautiful, and quite moving, too. Amazing technology and what a brilliant idea to give everyone seated a light and a drum! Loved it loved it! Must be incredible to be a part of it all!

Keep up the great work (and hopefully the updates too.)

I wanted to say how much I appreciate your blog. You give a fresh approach on all your topics. Thanks for letting us in on your experiences as you volunteer during the Olympics as well. Marilyn