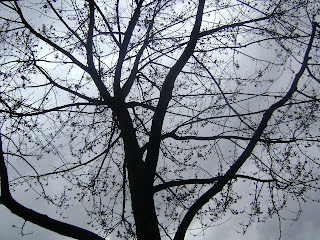 Hello Olympic fans! This shot should give you some idea of what the weather was like here on Sunday. Overcast and coolish, though not terribly cold. I was glad it wasn't raining though-the line up to check in through security was longer than usual as we had extra help coming in from other venues. 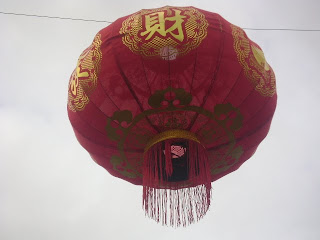 There were a string of these Chinese lanterns hanging at the Plaza of Nations. So pretty! 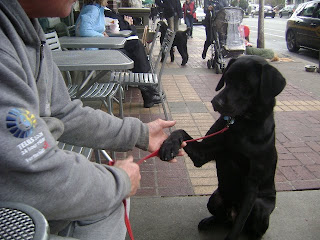 My husband drove me into the city because the crowds on the skytrain were huge. We brought Indy and walked along the seawall, as I was a bit early. We had enough time to grab a quick lunch at Urban Fare in Yaletown. Indy was doing tricks for treats and amusing the people sitting nearby. Everyone thinks he's so handsome. (They are right!) 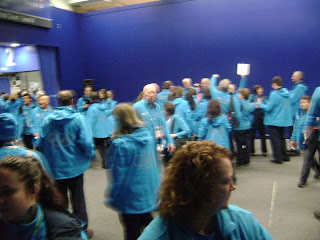 Here's the Events Services Volunteers waiting for their last Olympic deployment. While we were all feeling pretty tired at this point, we were still excited about the Closing Ceremonies and the big hockey game, which was happening right next door at Canada Hockey Place. 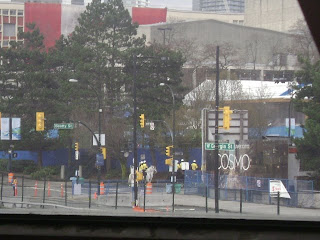 While we were having dinner (which was technically a late lunch, given that it happened at 3 p.m.) I looked down and saw half a dozen Vancouver Police members on horseback riding down the street. (These are city police, not RCMP.) You can see them in the center of the photo. Oddly, one of their horses was white. Usually law enforcement horses are all dark brown. 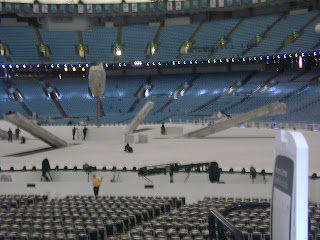 The stadium before it filled with spectators. They were making sure the hydraulics for the cauldron were working properly. 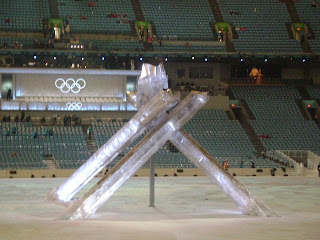 Looks good to me! I don't know if other people noticed, but the cauldron forms a stylized maple leaf. (Though that's not obvious from this angle.) 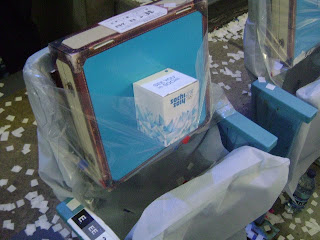 Every single seat in the stadium was prepared with a kit and the athletes' seats also had chair covers. The big box held all the things for the audience to do the "special effects" part of the show, a souvenir book of the ceremony and a snow globe from Sachi 2014 that lit up and also became part of the special effects.

If you watched the Opening and Closing ceremonies, you would have also noticed that the crowd had on paper ponchos. It was so that they could act as a large screen when images were projected onto a section of seating. It also gave an over-all bluish-white look to the entire stadium, making it feel more wintry. 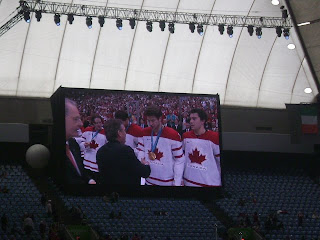 Prior to the ceremony, they were doing a live stream of the hockey game, so we wouldn't miss anything. As you can see, we were able to share in the GOLD medal moment! 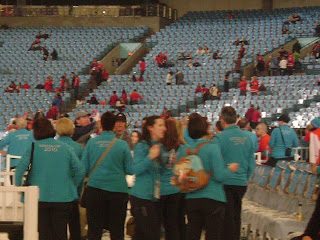 Though blurry, (no one would hold still!) this is a shot of my team celebrating the gold. There were high fives all around and tons of cheering and clapping. I think between us and the stage crew and the odd spectators who had arrived early, we about blew the roof off the stadium in our enthusiasm! 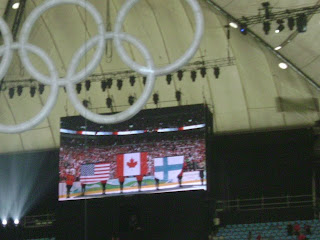 Seeing our flag rise and hearing our anthem played was the perfect way to cap off the games.

I have more photos from the Closing Ceremonies, but I figured it would be easier to break it up into a series of posts. Stay tuned!