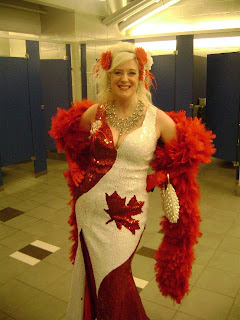 Okay, so from where I left off in my first post, which was just after watching the Canadian Men's hockey team receive their gold medals, I had to make my way down to Ring Road. (Which if you remember from the Opening Ceremonies is the "backstage" area below the stadium that runs in a circle around the field of play.) On my way, I stopped into the ladies' washroom and bumped into this Olympic fan. She said she'd had this dress custom designed and I told her that with a dress like that, she'd be sure to make an impression. She was kind enough to pose for a quick pic. 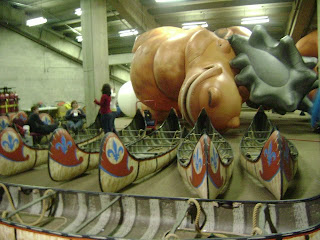 Down on Ring Road and making my way around to my air lock, I passed all kinds of props for the show. The moose is a giant balloon, much like the ones you see in the Macy's parades. I liked all the birch bark Voyageux canoes. FUN! 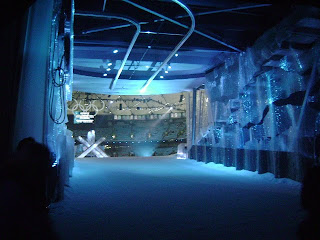 I like this shot of the vom leading out to the field of play and that you can see the torch in the background. 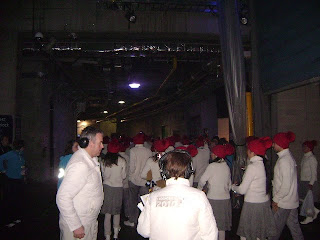 Here, the audience participation leaders are coming out of the air lock and into Ring Road, singing "Oh Canada". I guess they were very excited about the gold medal win. 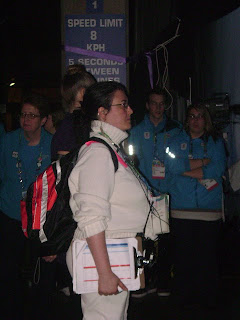 This hard working woman is Sarah Allen, who was in charge of our Athletes Marshaling team. I was sorry I didn't get a chance to say goodbye to her after the ceremony, but it was crazy. She's likely back home in England now. Sarah, if you chance to see this, THANK YOU for the opportunity of a lifetime and for being such a gracious leader. I will miss you! 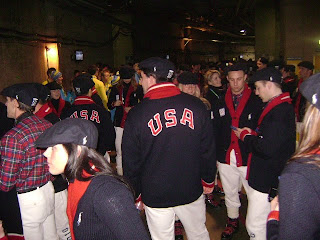 There is a period of time where I didn't take photos in Ring Road because I was busy helping get the athletes queued up to go into the Stadium for the parade. Basically, I was standing amongst them answering questions and holding them in place.

One American athlete came up to me to ask about the Paralympics and we got talking. Eventually this woman walked up to talk with him and I thought to myself "Wow! She's quite striking." I glanced down at her ID and it was Lindsey Vonn! How's that for elbow rubbing? I thought my American friends would be amused.

I also saw several celebrities, but I didn't take photos. It's not polite. I saw Catherine O'Hara, Donald Sutherland (who seemed to be around for the entire Games), William Shatner, Alanis Morisette, Avril Levigne and Michael Buble. (Hopefully I am not forgetting anyone...) Where I was positioned was directly across from the Green Room. Unfortunately, I missed seeing Michael J. Fox. 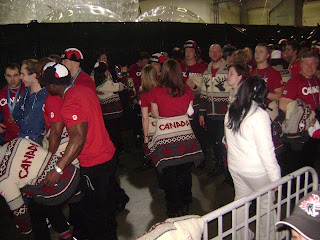 Here's the Canadian team, as I passed by on my way back up into the stands so I could prepare to seat them after the parade with my team. 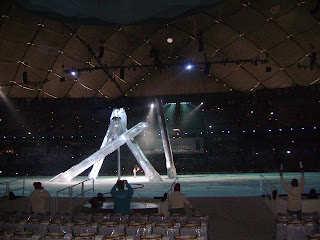 At the very beginning of the Closing Ceremony, they did a bit about the arm that didn't work during the Opening Ceremony. It was pretty funny. The seats you see empty here are for the athletes, who have yet to come out and do their parade at this point. 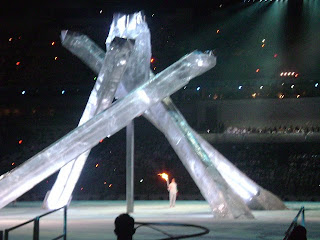 Once the cauldron was in place, the surprise was that Catroina LeMay Doan came up out of the floor with her torch and was given the honour of lighting the torch for the Closing. Normally, the torch would already be lit, but with this being the indoor version (the other is outside at another location) and the fact that her "arm" of the torch did not rise up in the Opening Ceremony so she was denied the chance to light it, this was a lovely way to resolve it all. 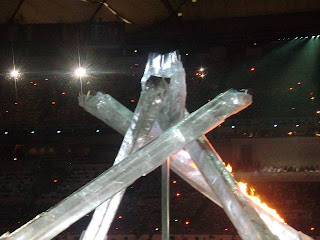 The flame making it's way up to the top. 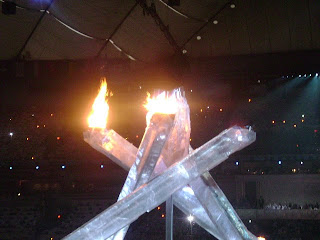 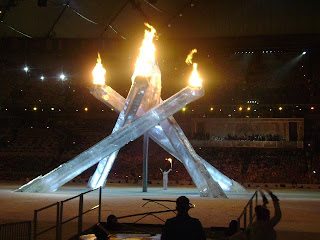 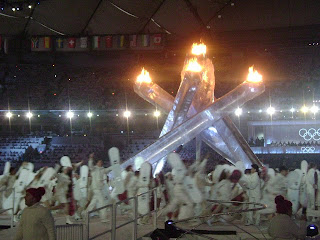 The opening sequence, which was about 1200 teenagers with snowboards creating visual effects with their red and white boards. 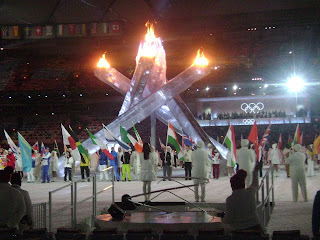 The flag bearers for the Parade of Athletes. Joannie Rochette, our bronze medal figure skater who lost her mother 3 days before her competition began, carried the flag for Canada. 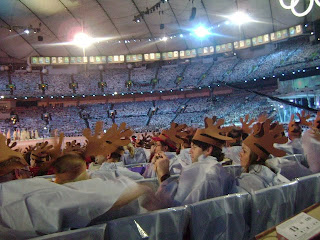 My view once all the athletes were seated. I sat in amongst Canada with my teammate Grace. 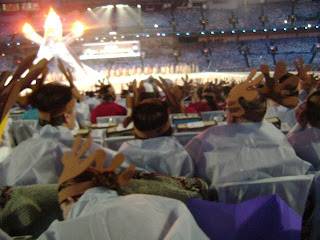 The moose hats were in the kits and the Canadians were eager to wear them. (They were meant to be worn later in the show.) But hey, it's THEIR party!

One thing that was really sweet was that one American athlete had made a sign that said "THANK YOU Canada!!" on it. As he was coming up the aisle past me to be seated, he pointed at me to get my attention and then pointed at the sign. I waved and thanked him. It was an unexpected surprise and he totally made my day.

I don't think anyone can truly appreciate how hard all the volunteers worked unless you were there. It's a HUGE job, though one we were all committed to doing, heart and soul. It was just very sweet and encouraging to having people stop us in the streets or at our venues and tell us we were doing a good job and that they appreciated our effort.

It's not exactly the kind of experience you can adequately relate to anyone who hasn't been through it and there were times where that heartfelt gratitude buoyed our spirits and helped keep us smiling and energized. We *so* appreciated the support we received from the locals, visitors and spectators in our mission to support the athletes, so THANK YOU to anyone who gave a kind word to a Blue Jacket. We love you for it!

thank you for sharing all your amazing experiences with us!

Great photos and reporting. So much better than the view from my couch :)
Thanks for sharing!