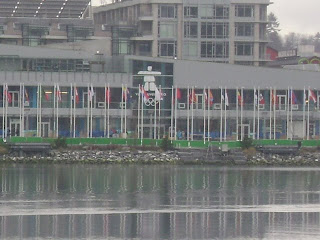 Day 15 (Friday) was my much-needed day off. Day 16 was a bit chilly and wet. I was supposed to have the day off, but a rehearsal for the Closing Ceremonies ended up being scheduled later in the afternoon and extended into the evening. As I was already downtown in the afternoon, I took the bus to Main Street and walked to the Stadium via the False Creek seawall. I just love seeing the flags out front the the Athlete's Village. 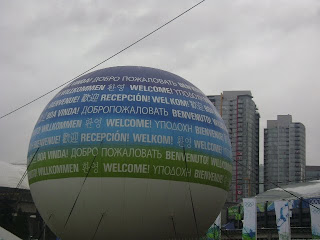 This is a big "Welcome" ball along the way, where all the Provincial houses are. 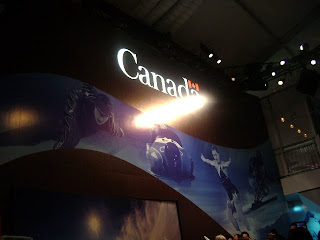 After the rehearsal, which was top secret, I met my husband and we walked practically the entire downtown core, seeing things we hadn't had time to see since the Games began, since I was busy the whole time. We went up to Canada House to collect my free pin and munched popcorn while standing in line. 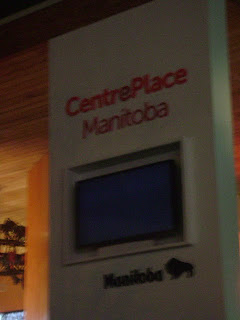 In the same compound (which was Livecity Downtown) was CentrePlace Manitoba. Being a Winnipegger, I had to go in and check it out. 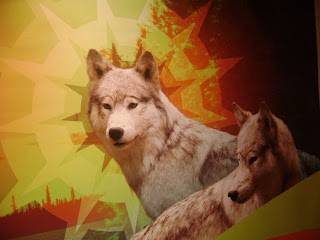 They had some great graphics on the wall, including this one of the snow wolves. 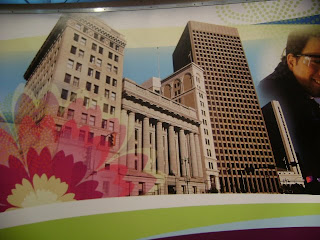 I got all nostalgic looking at this one. The building on the left is the giant Hudson's Bay building where I spent alot of time shopping as a kid and the one on the right is the Richardson Building, which is known for being the tallest building in the downtown core. 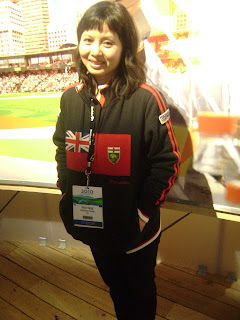 This is one of the volunteers. I had to get a pic of her jacket. She was very nice about it. She gave us a small squishy polar bear. It had a website addy on it to enter to win a trip to Churchill, Manitoba. The package includes a trip in a tundra buggy to see polar bears and other northern wildlife. It would be so cool to win that! 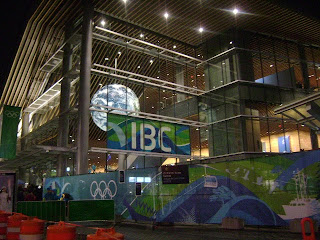 After we left Livecity Downtown, we wandered into Yaletown to see if we could get into Livecity Yaletown, but the wait was an hour long, so we hopped the Canada Line train and got off at Waterfront so we could go to the Canadian Mint house. Unfortunately, they had closed their line up, so we didn't get to see that either. They did say they were planning to be open during the Paralympics, so I'm hoping to get to see it after all in the next couple of weeks. We've tried twice now, with no luck.

From there we made our pilgrimage to see the Olympic Flame outside. (Remember there was the one lit during the Opening Ceremonies inside the stadium, which was only lit for the ceremonies, but there was this second one which was kept lit for the duration of the Games, outside at the waterfront.) On our way there, we passed the International Broadcast Center, located at the Vancouver Convention Center. 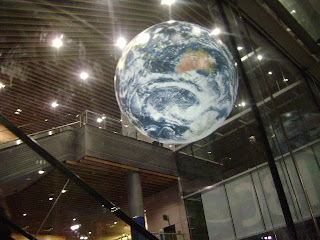 They had this huge world suspended from the ceiling in the entryway.
This is where all the media had their broadcast sets. I saw Brian Williams through the windows, on the CTV set as we walked by. 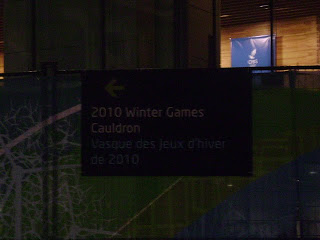 Onward to the cauldron! 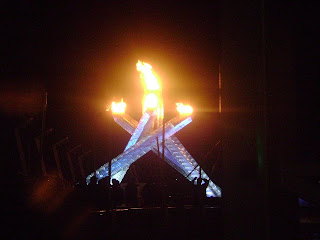 Here's the Olympic flame in all it's glory. There was a better viewing area, but there were 1000's of people and it would have taken hours to access it, so we just snapped a few quick photos and moved on. 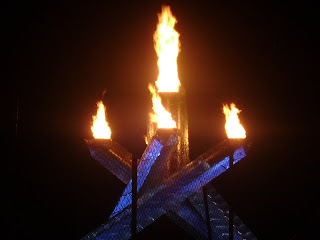 I thought it was quite pretty, lighting up the harbour. After that, we headed for home because I had to be up and out early for the Closing Ceremonies.

Tomorrow I will post about the closing ceremonies, as that's going to be a rather long post, with tons of photos. I have today off and then I start my Paralympic experience tomorrow evening. No rest for the wicked! The 2010 Paralympic Opening Ceremonies takes place on March 12th, but, as always, the work begins long before that!
at 12:42 pm

I just can't thank you enough for posting about the olympics so that we could live this experience through you. Also congrats to the hockey team for winning and unfortunately for beating us but that's okay too. The olympics will live in your heart always and also in ours because of you.

Time for a "breath" between these Olympics and the Paralympics!! Love these photographs and can't wait to see what you captured for the closing ceremonies!! The excitement and joy must have been palpable yesterday and last night!! :)

The flame is pretty amazing. I look forward to hearing about the closing ceremonies!
BTW ... Bully for Canada for winning the hockey game! I know I'm American & am really proud of all the US accomplished up your way - but I have to admit I was pretty tickled that Canada won! Go, Maple-Leaf-People. (LOL)

It has been great to read your blog, took me back to February and the good memories I have.

Thanks also for reading my blog.