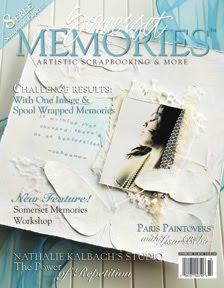 I am pleased to announce that I have been published in the current issue of Somerset Memories! Quite some time ago, several members of the Hannah Grey design team worked on a project where were were asked to work with a specific image. The results of that project were submitted by Debbie Metti, who coordinated our effort and in January we got word that it was going to be published in the Spring (April) edition.

If you pick up a copy, you can find the article, "With One Image" on pages 24-26. My piece is called "Captured Memories" and it's a collaged image of my hand with an opticle illusion of a tree in the center. You have to see it to appreciate the illusion. Included is the tutorial I wrote on how to replicate what I created in the back of the magazine on page 150.

It's nice to see that piece again-to be truthful, I'd forgotten about it. It's been ages since it left my hands but hopefully soon it will make its way back home. When I created it, I thought it might be fun to do a series, so perhaps I can explore that in the near future.

Whenever a book or magazine shows up with my work in it, I always tease my husband that he's Mr. Lelainia Lloyd and he laughs and calls me a rock star. It doesn't matter how many times I have the priviledge of being published, it never gets old.
at 7:54 pm

Congrats on the publishing...will look for a copy..take care now..

Yay!! That is so wonderful! I will have to look the next time I'm at the craft store!

Very cool. I will have to check out the zine and see your groovy work and tute. And you are a ROCK STAR !xoxoxoxoxo

Hey Lelainia...I'm happy your issue got to you. That was a fun group project & I'll send your postcard back as soon as I receive it from Stampington. They said it would be returned sometime in April...but nothing yet.
xo
Debbie
===^..^===
http://kittencreates.blogspot.com/
http://kittencooks.blogspot.com/

Awesome. I was just flipping through it in the bookstore yesterday.