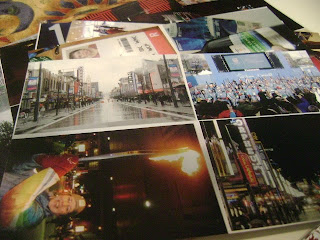 Workin', workin', workin'!! Yesterday I chose the photos I wanted to include in my Olympic ROD journal and sent them, via the Internet to be printed. They were ready within a 1/2 hour-how convenient is that?!?

Once I had the photos in hand, I went and made colour copies, reduced to 50% of the original size so that they would fit nicely into the journal. 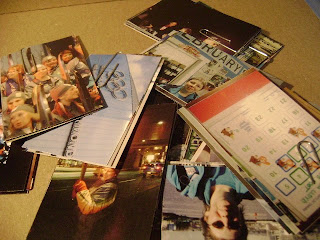 While I watched a movie last night, I cut the sheets apart and trimmed the copies. Then I sorted them into pile by subject.

This morning, I was up early, so I came right into the studio and started gluing the images in my journal. It took me an hour and a half, which was pretty fast! 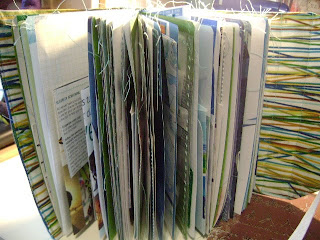 Here's a shot of the signatures sewn into the fabric cover. 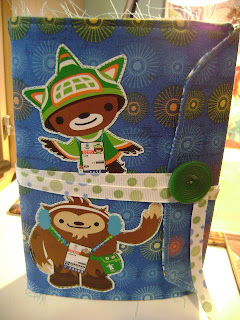 This is what the cover looks like. The whole thing is about 1 1/2 inches thick!

The next step is for me to go back into my blog archive and cut and paste the parts of my entries about the Olympics and Paralympics to Publisher, format it and then print that out to be included. Once that's taken care of, the rest of the journalling will be done by hand.

I am pleased with how much I've managed to do in just one week. I didn't work on it every day, so it's really less than a week, but the point is, I'm making progress! 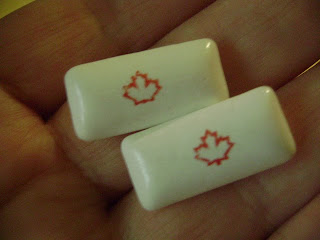 I had to show you this: it's some gum that were were given in our "welcome kit" when we picked up our uniforms. I just got around to opening it because I wanted to sew the packaging into my journal.


It amuses me that there were "official" Olympic candies-gum and chocolate bars. I sewed the chocolate bar wrapper into my journal as well. I've seen the bars still for sale in a few places and I will probably buy a few more before they're gone, just to have. It's a Snickers bar, in case you're wondering.

Your Olympic ROD journal is absolutely breathtaking. I love it and it has been great following you through this experience. What a blessed person you are.

The journal is looking wonderful, what a treasured book of memories you will have when it is completed.

Can't wait to see more details of this journal! What a treasure!

Wow! You did a lot this last week. I think the ROD format is just perfect for your visual Oly journal. I can't wait to see it!

Lelainia -- I have been following your Olympic travels thru the ROD yahoo group... and I must say that this journal looks fabulous. It is like a time capsule for the Olympics this year. FABULOUS!!!

Your journal is wonderful! I hope to look through it some day. What a treasure to remember this time by.