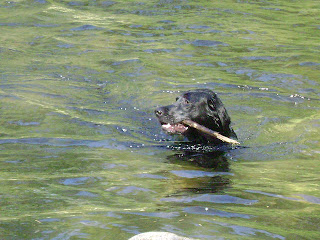 In honour of the title of this post, I give you Indy, in all his happy water dog glory on Saturday. We're in the middle of yet another heatwave (when will it END?!?!) so we took pity on the poor kid in the fur coat and drove him to the river for a dip. It always puts a smile on my face to see him happy and he's never happier than when he's in the water.

Not only is he born and bred for this kind of thing, but my sweet boy was born on the Ides of March, March 15th, making him a Pisces, so he's a true water dog in every sense of the word. 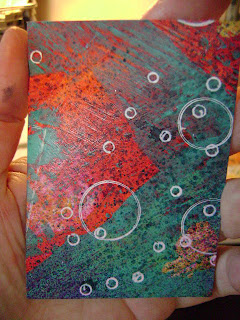 Sunday was our monthly ATC swap, so once we were home from the river, I got busy in my sweltering studio. I guess heat exhaustion did something to my brain because I just started dumping paint directly from the bottle, onto a large sheet of glossy card stock and quickly swiped it around. (It was almost drying faster than I could move it around!)

I sprayed inks on it and kept layering mediums, including writing on top with a new Sakura pen, which, for the moment is actually working! (You'll remember 2 posts ago, I was talking about the quest for a white pen that works.) Eventually, I cut the master sheet into cards. 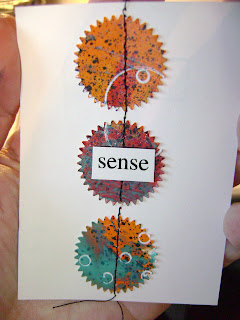 I had some pieces left over, so I grabbed a new punch I'd bought on Friday and clipped these seal shaped circles out. And then I thought "Hmm..I bet those would pop on white. I should sew those onto blank cards." So I did... 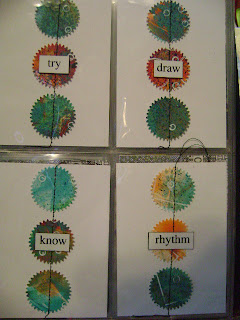 And I added some text and kept the threads long so they could hang. I named them "Thoughts on the Wind" because when I hung one up, the fan in the studio caught it and spun it around. It reminded me of Tibetan prayer wheels, which are spun so the prayers can go out into the wind.

I find it kind of telling that sometimes, you begin one thing and it evolves into something interesting, if you can get out of the way and just allow the creative process to unfold. The ladies I traded with thought they were pretty, is perhaps I will make some more.

The Richmond Art Gallery is having their annual ATC exhibit soon. I've never entered cards in that show-the timing has always been off for me to be able to do it, but this year, I think I can manage it. You should click the link too if you make ATCs because you can participate too! The show is always spectacular and well attended and at the end, your cards will be traded with the other artists! 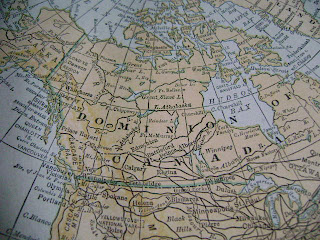 I also hit the jackpot at a local thrift store over the weekend. They were celebrating their 5th birthday and had deep discounts. I scored 4 vintage books for a whole $5 total, which included images like this historical map of Canada. I love when they read "The Dominion of Canada" which is how Canada was referred to until the 1950's. 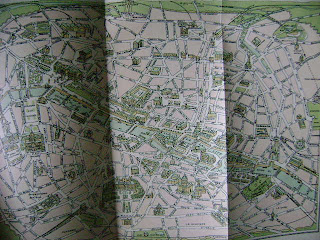 I also got a French language book, which had this cool map in the back cover. It's of Paris. 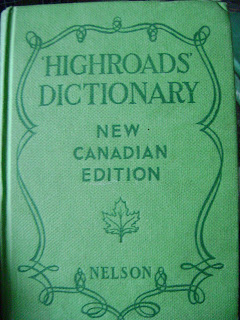 I was thrilled to find this Canadian dictionary, from which I have removed the entire text block and am revamping it as a journal. I've already reinforced the spine and recovered the inside. Now I just need to create the signatures and sew them in. It's a small book and perfect for this alteration project. I really like working with Canadiana. 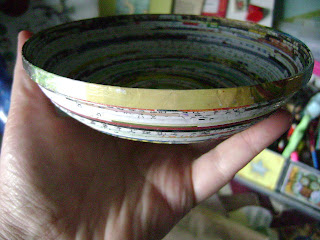 On Sunday, when I was over at Penn's before our ATC swap, I spied a paper bowl on her desk and fell in love. She got hers from this place called 10,000 Villages, which is a fair trade artisan shop. 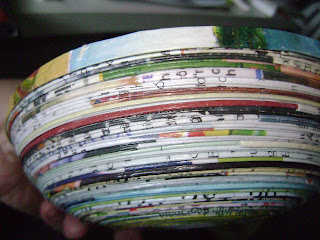 We went down there before the swap and I picked out this bowl for myself. It's made from recycled magazine pages. The artists use an umbrella spindle to twist the papers tight. Then they flatten them and sew them end to end. 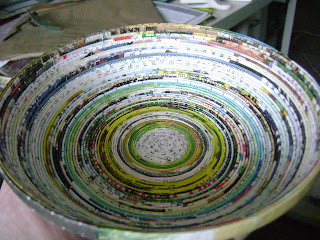 They would them to form the bowl and then cover it with a starch solution to set the form. I think they are so cool and each one was a different colour, based on the pages they used. I've put mine on a corner of my desk as a catch all for things. LOVE IT!! The next time I see a broken umbrella on the street (Vancouver has lots of those!) I will snag it so I can harvest the spokes. I'd like to try making one of these myself.
at 11:12 am

I did not know sweet Indy was born on the ides of March! The wee one was born the same day in 2007 and like Indy, she is a true Pisces. It takes an act from congress to get her out of the bath, pool or puddles.

Wow, you have been ripping it up in the studio. Your layer work is just awesome as well as your atc/prayerflag/cards.

The bowl is so cool. Some folks are so bloody talented. I would have no idea where to start on a project like that....

Please give sweet Indy a big hug and kiss for me. xoxoxo