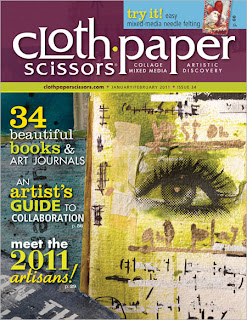 While I was out and about today, I picked up some goodies at Chapters. First, I found the current issue of CPS, which I wanted to get because the mysterious and talented Seth Apter has a feature in this issue. He was involved in a collaborative project called "Self Contained" and I want to read the article. Not only is this work in the magazine, but it also made the cover! Way to go Seth! I can't wait to read all about it! 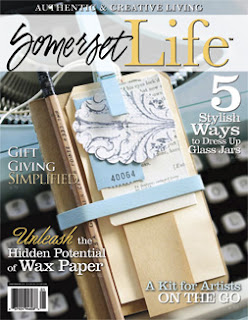 The latest issues of Stampington's magazines were also on the shelf and I made the mistake of picking up Somerset Life. This particular magazine appeals to me simply for the photographs. I will confess that I'm not in it for the articles-it's all about the eyecandy. I thumb through slowly and daydream about making the things in it, about getting those things as gifts in the mail, having those things gracing my studio...yes, I'm just a tad smitten with the contents of this magazine. I had to buy it. At $18 CDN it's steep but I couldn't resist. 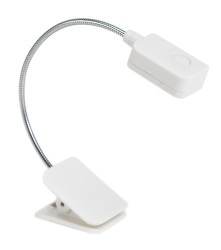 The other little goody I bought was this Verso clip light. I find that since our place doesn't have overhead lighting, in the winter evenings, especially when the weather is ugly, I am straining to read at night-so much so that I've pretty much given up.﻿ I spotted this little gizmo and thought it would be worth trying. It was all of $20. It came in blue or white, so I got white. I wish there had been red ones in stock. (My fav colour.)
The batteries already in it, so it's ready to use and the box claims you can get 20 hours of light out of it. You can clip it to your book (if it's a hardcover) or if you own a Kobo or iPad (sadly, I don't) you can clip it to that. The neck is adjustable. I'll give it a whirl. If I don't like it, I can return it.
While I was standing there looking at the lights, a clerk came running up and asked if I had a Kobo. (The display with the Verso lights had all the Kobo stuff on it too. I think she thought I was looking at the Kobos.) I told her no, I have an iPod and before I'd even finished getting the words out, *poof* she was gone! Why waste time talking to someone who isn't going to enhance your commission? Not terribly impressed with that Chapters! The staff all seem to have better things to do than help you shop. *rolls eyes* She didn't even stick around to tell me about the darn Kobo, about which I know nothing. Maybe if she had, I might have bought one. She'll never know! Silly woman!
Anyway, I'm off to dinner shortly with my Blue Jacket team. We're celebrating the 1 year anniversary of the 2010 Games tonight. It's a month early, but some people were coming in from out of town (including the girl from Quebec whom I hosted for 3 weeks) and there's a big day-long party next month for all the Blue Jackets, so we wanted to be able to attend that. It's hard to believe that this time last year, I was sitting on the secret that I was going to be carrying a torch for the Paralympic Torch Relay. How time flies!
It will be great to see my team and catch up. We've been getting together every couple of months for dinner-we're pretty tight. It's nice that that was part of the legacy of the Games-we all got to make new friends and we've stayed in touch. I'm excited to hang out with my travel partner Sharon tonight. We spend 99% of our time together laughing. We had THE BEST time travelling back and forth from the venue during the Games. Every night was an adventure. We have stories!
Okay, I must fly, but do check out Seth's blog, if not the article in CPS. Lots of inspiring stuff there.
at 5:27 pm

I haven't got to that part of Cloth Paper Scissors yet...it's the only magazine I subscribe to and I love to read it very slowly. I don't want to miss a thing.

Happy Olympics party. I think I'm going to one next month!