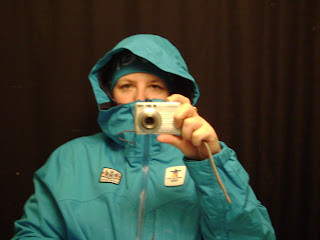 ***********
I am so proud to count myself among the beloved Blue Jackets of the 2010 Games. People still stop me to ask for help or directions when I am wearing my jacket. Those Jackets and the people in them made an indelible impression on the world. I am extremely proud of that legacy and today I celebrate it, along with thousands of others who came from across Canada to serve visitors from around the world, this country, this province, this city and most importantly, the Olympic and Paralympic Athletes. It was our privilege and our honour.
at 3:20 pm

LOVE this post! And I do believe blue is your color. (grins)

I do believe you may end up as Canada's version of the Statue of Liberty - albeit in a blue coat!