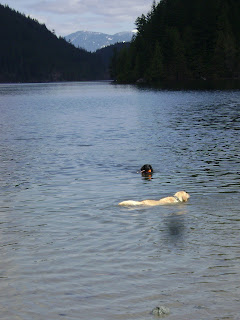 It's the weekend, which means we've been out this morning, taking Indy (black Lab with the orange Kong in his mouth) for a swim. It's blue skies and sunny here in BC today, though it was a tiny bit chilly up at the lake. Still gorgeous though, as you can see. My dog has a very good life.
So it's been awhile since I've done an update, so here it is:

Creating: The last month has been quiet in the studio. I've been pretty sick and haven't had the energy to do much. I can't seem to shake the sinus infection I've been fighting. The only thing I did manage was to author an article, which I will tell you about real soon!
Reading: Still inspired by Vivienne's Wading In class, I am reading about photography now. I own Liz Lamoreaux's Inner Excavation, which I am re-reading in anticipation of owning a new DSLR camera very soon and I borrowed Expressive Photography by the Shutter Sisters from the library. Fiction-wise, I am about to start Jonathan Kellerman's latest novel, Mystery. I've been reading his series for years and every year, he publishes a new novel just in time for my birthday. Isn't that nice of him?
Watching: The new season of The Amazing Race is on. I've lost track of how many season they've had, but I've seen them all. I've also caught up on all the seasons of Nurse Jackie that are currently on DVD. I don't get Showtime, so I'm not watching it as it's in season, unfortunately. Edie Falco is brilliant and the girl who plays Zoey is hilarious. I love Nurse Jackie as much as I (used to) love HOUSE. If you're a fan, iTunes has a Nurse Jackie podcast with videos behind the scenes. It's free to subscribe.
Listening: I recently downloaded a whole lotta tunes from iTunes! Yes, it was a bit of a feeding frenzy. Here's the list:
- Bruce Cockburn had a new album out. I like his instrumentals ALOT. The new album is Small Source of Comfort. I bought 2 tracks: Bohemian 3 Step and Ancestors.
- Amos Lee has a new album out too called Mission Bell. It was a whopping $5.99 for the entire album, which is 13 tracks. How can you lose? I like everything on it. I cannot believe it was only $5.99. This could become one I play over and over while I work in the studio. It's perfect.Willie Nelson makes an appearance on this album. I like Willie in small doses. Cup Of Sorrow is my favourite track.
-Eddie Vedder has this album that hasn't been released yet, but there's one track available, called Longing to Belong. The quirky thing is that the album will be called something like 16 songs for Ukulele. Yes, 16. *laughs* It should prove interesting. Of course I had to get my husband to remind me which band he's from (he thought it was Van Halen, but it's Pearl Jam. *giggles*) and yeah, he's gone way away from his roots. Good for him! Stretch that comfort zone. I think as an artist of any kind, you have to be willing to experiment and risk failing spectacularly. I think that's the only way to grow and if you're not growing, what's the point?
-Kina Grannis' cover of The Sound of Silence was too good to pass up. I (so far) don't care for her own songs, but she's BRILLIANT doing covers. BRILLIANT.
Anticipating: The launch of something that is a secret till it's live. That's all I'm sayin' for now! Soon, though, I will be able to tell you about it! Soon!
Dreaming: Deamin' about a summer filled with experimenting with the new camera I will soon own. I am looking foreword to learning something new and seeing what comes of it. Gotta love new toys!
at 1:17 pm

Eddie Vedder is a favorite...loved Pearl Jam during the grunge days... :) But with ukelele? I'll have to check that out...

Can't wait to hear the news!! The suspense is killing me...I'm not known for my patience!

I love your lists and the many interesting things you do. I completely agree with you re: Nurse Jackie. Great chemistry, great characters, and writing. I am so disappointed with House too. : (
Will check out those tunes and reads you mentioned. xoxoxo