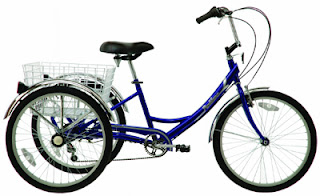 For years I have wanted to rent a bike and cycle around the Stanley Park seawall. Everyone does it here because 1. it's flat and 2. it's gorgeous. After 25 years of living here, I finally crossed that off my life list.
We rented bikes from English Bay Bike Rentals, which is on the west side of the park. Nick, who works there was really friendly and helpful. I opted to rent the 3 wheel trike, so I wouldn't have to worry about balance (which is off because of my MS) and because it had the handy dandy basket in the back to haul our picnic lunch. Nick gave me a quick rundown of the gears and how to engage the parking brake and we were off.
We took Indy with us. Indy has no experience trotting alongside a bike. It took a few minutes or riding for him to understand that veering in front of the bike was ill advised. Also, Indy does not understand that he is not a sled dog. I had hold of his leash and he was pulling me. I had to gear down to create more drag and with the one had I had free, ride the left break to slow him down enough that I wouldn't be killed. Yeah. Adventure at it's best. Let's just say that Stanley Park's seawall is 8.8 km (5.5 miles) and I did very little peddling. I am completely floored how strong he is!
We did stop several times to let him rest and give him water. He also had a dip in the ocean for a good 1/2 hour because being that close to water and not getting to swim is torture for a Lab. We stopped for our picnic as well and had a good chat with an older couple from the UK who were here on holiday and also own a black Lab. (They were missing their Lab who was at home, so they enjoyed patting Indy.) For the record, Indy wasn't even close to tired when we got home. We could have easily done a second lap around. 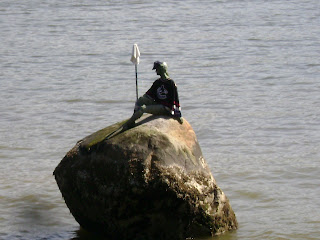 Here's the Diver, which I've showed you before, but as you may or may not know, Vancouver's hockey team is in the Stanley Cup playoffs and our city has gone a little bonkers. Hockey is a religion in Canada and so this is a really big deal. Some goofball dressed her in a Canuck's Jersey and gave her a stick with the white towels fans swing in the air at the games. So silly! We also have to giant Lion sculptures at either end of the Lion's Gate Bridge  (which runs through the park) and someone's decked them out in jerseys too. 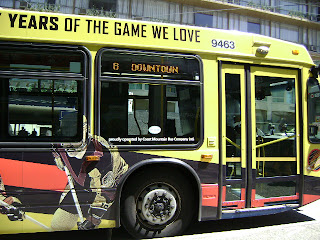 This bus was parked outside of the bike shop. It's completely decked out for the playoffs. 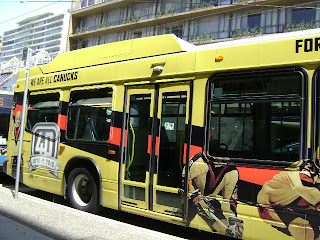 The colours were the original colours of the Canuck's uniforms. (Fulgy if you ask me!) The current incarnation is blue, green and white, which is more in keeping with west coast colours. (Blue being the ocean, green being the trees and white being the sneaux on the mountain peaks.) 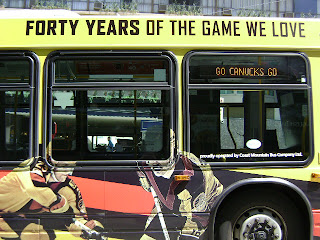 Even the digital signs where you see the bus name and number have been altered to reflect the occasion. If our team wins, it's going to be utter pandemonium. I'll just be glad when it's all over-I'm not really a hockey fan.
Anyway, this weekend has been the first sunny weekend we've had so far and it was so nice to get out and do something I've wanted to do for so long. We had such a great time, we're planning to do it again.
We've also decided that we're going to cross another thing off my life list over the summer: we're going to go on a whale watching tour! The tour leaves downtown Vancouver and goes to the the Gulf Islands (Canada waters) and down into the Straight of Juan du Fuca (US waters) and lasts 3-7 hours depending on where the whales are. I've always wanted to go out on the ocean and see the whales in their natural habitat. We live in an area where there's such a rich and diverse ecosystem and I want to experience as much as I possibly can. Besides, I have a brand new camera to break in and what better way to do it than whale watching?
at 8:47 am

I'm so glad that you FINALLY had the chance to do the bike ride around the sea wall...and I love the bike you used. I understand why and I'm glad you had that additional balance...but that's exactly what I'd need too -- too many years of not riding a bike has left my "wiggly"!!!! I'm laughing at Indy -- thinking he's a sled dog...what a visual!!!

I remember those old Canucks uniforms and fugly they were!! I much prefer the green/blue/white combo -- and here's hoping they continue to do well..2 games up!

Whale watching...something I've always wanted to do -- I look forward to hearing about and seeing your account of that adventure!

glad you were able to cross a wish off your list...I don't get to Stanley park much anymore due to the crowds...loved whale-watching..did ours off Tofino and had to wear those orange rescue suit lol...take care..

yay for crossing something more off your list and awesome that it was a bike ride!!! it sounds glorious. :) i love that you're LIVING life.