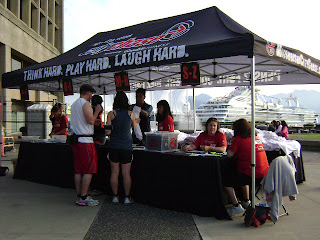 On Saturday morning, my son and I were up and out early to get to the City Chase starting line, which was at Granville Square, near Waterfront station in Vancouver. 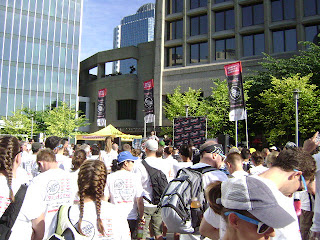 The crowd of Chasers was huge-I think there were 700 of us! The race kicked off at 10 a.m. sharp and everyone bolted out of the square, across the street to the top of a parkade to get their clue sheet for the chase points we would be visiting throughout the day. It was mayhem and I found it hilarious to see the confused looks on locals' and tourists' faces as this sea of white t-shirts blew by them. 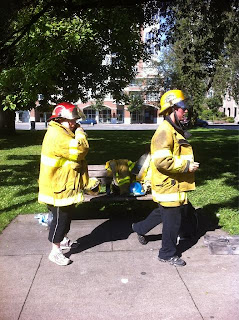 (Photo credit City Chase)
After figuring out where we were going to start, team Brave & Crazy hopped on the skytrain and got off at the Main Street station. Our first Chase Point was "Rescue Me" which involved donning fire fighter gear and shooting water out of a fire hose to knock stacked up targets down. Then we had to drag a dummy in fire gear a certain length and finally, have one teammate put on a black-out mask and crawl a course using their partner's vocal directions for guidance.
From there, we went to Strathcona Park on foot (long hike!) for "Land Surf" and rode on long boards (like a skateboard only way more wobbly) along a paved winding skate park path. I took a bad spill* on this Chase Point but picked myself up and managed to finish. Pretty proud of this-I have no proprioception thanks to damage on my spinal cord from MS, so balancing on the long board was really difficult (thus the spill) but with excellent team work, we successfully completed this Chase Point in decent time.
From there, we made our way on foot to Hastings and caught a bus to the "Tourist" Chase Point. In this one we were give a Blackberry and had to travel on foot down Hastings to find things listed on a clue sheets. We had to photograph the answers and then return the Blackberries with the correct answers on them. This took awhile because some of the things we had to photograph were hard to find-like we had to find 10 strangers, line them up from tallest to shortest and take a photo. It was hard gathering 10 people, so we burst into a restaurant, interrupted people eating their lunch and asked for help. They agreed, but after we'd left, we discovered that the photo didn't save, so we had to shoot it all over again. We had to round up another 10 people! ARGH!
After that, we hiked to Pandora Park and did "Bananagrams" which was a welcome relief. We sat in the shade and got a sock filled with Scrabble tiles. We had 10 minutes to make them all into intersecting words like you do in Scrabble or we'd have to drink water out of our partner's sock. My kiddo got grossed out by that idea until I pointed out that we'd both packed a spare pair of clean socks in our backpacks and could use those! (We are smarter than the average bear! It pays to be prepared!) It didn't turn out that we needed to worry though-I play, on average, 10 games of Scrabble a day (online) and have played the game since I was 4 years old. We banged that one out in under 2 minutes! 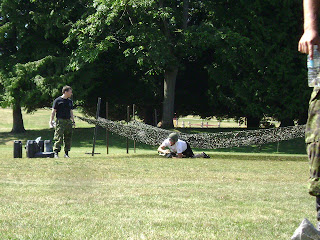 Off again, this time to catch a bus for a short ride to Renfrew, to a park across the street from the PNE for "Sir, Yes Sir" where my boy took one for the team, running the army obstacle course twice because the tendon problem in my foot prevented me from running. By this time it was noonish and scorching hot. 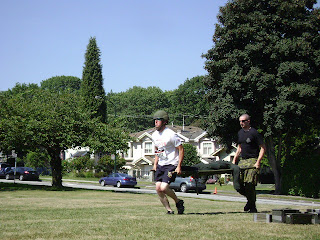 He managed to do it fairly quickly, but was dizzy and feeling queasy by the time he finished. We paused for a couple minutes so he could rehydrate. He was my hero at that point in the day!
From there, we caught another bus, making our way to the skytrain station. We had a bit of a route crisis at this point because we weren't sure the best way to access the next Chase Point we wanted to get to, so there was some muddling around. We ate while we waited for the skytrain and made our way back to another station. When we were switching platforms at Broadway, we ran into friends who live in the neighbourhood and gave us advice about how to find the Chase Point we wanted. As it turned out, we never did go to that one.
We rerouted at Main Street station, making our way by bus to Charleton Park, a park where we take Indy swimming all the time. The bus drivers at this point were proving to be really unhelpful in terms of navigating to where we wanted to go, so we relied on our own observations while we road and hopped off when we spotted the park from the streets above. When we finally got to the "Zumba Life" Chase Point we were almost out of water. Believe me when I say it was HOT and we were not pleased to have to do a 5 minute dance routine on the seawall. The music just seemed to go on and on and on.
We left that one almost delirious and I guess we looked pathetic because when we asked a local walking his dog how to get out of the park and to the nearest bus stop, he walked us there. 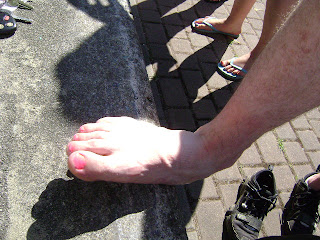 Another bus ride and we were over by the Burrard St. Bridge. We stopped and bought more water (thank goodness!) and then proceeded to "Beauty Bar". We had to have a stranger draw a ticket out of a bag for each of us. One was "wax upper thigh" and the other was "paint right toes". This time I took one for the team cause my partner has hairy legs and waxing his thigh would have been painful. He waxed my thigh-didn't even feel it! (Being fair skinned, I've never had to shave above the knee.) and then I painted his toes. *snort* (His toes are still pink-I don't have any nail polish remover in the house.)
From there, we hoofed it to "Krazy Karts" our last Chase Point of the day. There was a bit of a line up, so I took the opportunity to guzzle more water and cool down as much as I could. We had to have one partner strapped into a go-cart and the other pushing. There was a bucket at the opposite end of the parking lot and the driver had to throw a tennis ball into the bucket. We had to get 5 balls in, going back to the start each time to get another ball. This took awhile because it's really not as easy as it sounds, but we managed to do it in about 10 minutes.
From there, we caught a bus and headed to the finish line, coming in at 6 hours, 25 minutes**. We completed 7 Chase Points. There were teams that came in behind us and many that didn't finish at all. The fact that we finished, in 30C heat, with 10 lbs. of stuff in each of our backpacks, with me being hugely affected by MS symptoms that worsen in the heat and a wrecked foot makes me REALLY proud! Not only that, there was not a single fight or cross word and we were smiling as we crossed the finish line. I'd say that's a huge accomplishment.
So how did we celebrate? Well first we went to dinner, because we were starving. We'd eaten the food and water we'd packed all day long, but with it being so hot and covering so many kilometres on foot, it felt like we hadn't had a thing all day. We found a nice patio in the shade and felt so much better after we'd eaten. Then we decided on a whim to do this: 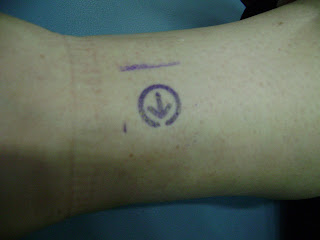 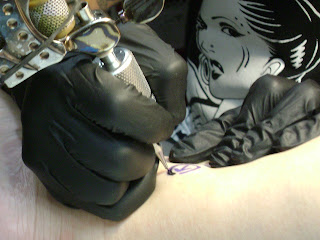 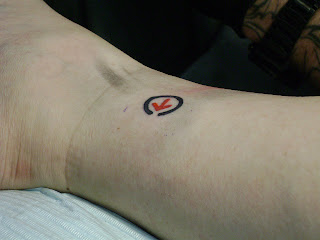 Yup! We went to Adrenaline  and got tattoos of the City Chase logo on our ankles! This was hilarious because we were making our way to the skytrain, down Granville St. and as we neared Adrenaline, my son turned to me and said "Hey Mum, we should get tattoos." and I instantly agreed, so we walked in and did it. Afterwards he said he was kind of shocked that I would do it on a whim. Oh young Grasshopper, you have so much to learn about your mum!
I'm glad we did it-it's a memory we will always have of a crazy good time, doing something that was challenging (especially for me), but rewarding.
THANK YOU to Urban Rec for gifting us with this opportunity and to City Chase for making it happen. We are deeply grateful. We can now cross that off our life lists with huge satisfaction.
Also, thanks to Jenn and Penn for their "On Star" tech support!
***
*That spill actually resulted in excruciating knee paint that I didn't really become aware of till after the Chase ended. I was so focused on dealing with (read: ignoring) the pain in my foot with the wrecked tendon that I didn't realize I'd injured myself. I went to the ER early on Sunday morning to get assessed and have x-rays. Nothing broken, but I have messed it up and have to stay off it till it heals. No more long boards for me!
**Dying to see the finishing results-I want to know where we placed over all! I'm curious!
at 9:44 am

This race sounds incredible and I LOVE that you two got tattoos to remember it! That rocks!

awesome!!! I am so glad you two got the opportunity together, and what a great way to celebrate your finish! Funny, i was at Adrenaline on Saturday afternoon, watching my friend get holes put in her face :P

I don't know how much help i actually was, but i was happy to do it! Maybe one of these days i will raise some funds and participate :)

FABULOUS, STUPENDOUS, WOWALICIOUS BOMBKABOOMS! You did it! I am so proud of both of you! Give Carver a pad of acetone nail remover & tell him the first wipe is on me. (though I'd love to see how long it would take for the pink nail polish to wear off.) And you, my dear, deserve a kiss from Harrison Ford! I guess Indy will have to do.
Love you bunches!

I absolutely love that after all that, you got tattoos! Congratulations on all that hard work. PHEW!

What a fabulous day! You must be super proud of yourselves. I love that you got tattoos! What amazing memories to have made.