So I promised to share with you something both weird and interesting that Carol and I happened upon yesterday.

On the edge of Chinatown, adjacent to the railway, in an area which was known back in the day as Hogan's Alley (and which up until yesterday I didn't know existed) there is this little red building (street address 207 1/2 Union Street-another quirky half address!) with a small fenced in yard. Handmade signs plastered everywhere around it proclaim it to be the "Jimi Hendrix Shrine". 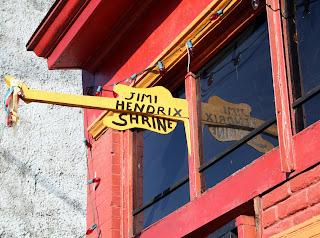 In the small fenced in yard are some white handmade boxes with baskets of plastic flowers on top, each in honour of members of the Hendrix family in front of what looks to be a tiny stage surrounded by curtains. It's pretty odd.

There is also this doorbell with a sign that reads "Experience Button Press and Hold". Carol and I stood there trying to figure out what pushing the button might do. Activate lights? Or music? Or summon someone from inside? We had no idea, but we decided we most certainly did not want to summon anyone early on a Sunday morning-that was not an experience we wanted. Eventually Carol bit the bullet and pushed the button, as we held our breath.....and nothing happened. The only "experience" we got was utter confusion. It remains a mystery what that button is supposed to do. 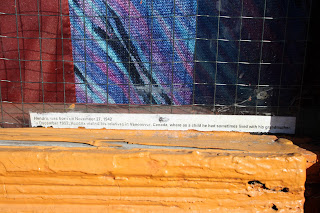 In the window were little snippets of information. This one states that Jimi would visit his grandmother here in Vancouver and sometimes live with her. This building was an old restaurant where his grandmother worked as a cook. The info claims that music greats like Elle Fitzgerald, Louis Armstrong and Lena Horne would come here for fried chicken. 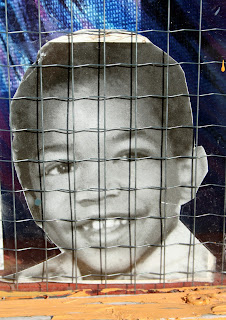 See? Jimi as a kid. The windows were dark with curtains, so we couldn't see what was inside. 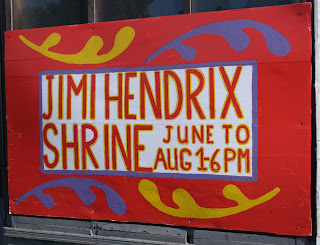 When we walked around the corner, we discovered that the shrine is only open afternoons in the summer. Of course, me being me, I poked around on the Internet and found this video of the place.

The part of this that is interesting to me is that Hogan's Alley was the black neighbourhood in Vancouver. The black community settled there, as sleeping car porters at that time were predominantly black men.  It was home to the only black church in Vancouver at the time, the African Methodist Episcopal Fountain Chapel.  I found a photo of how Hogan's Ally looked back 1958 in the City of Vancouver archives.

In 1970, the community was destroyed by the building of the Georgia Viaduct, which was phase one of interurban freeway which was also intended to wipe out Chinatown and Gastown as well. Community activists and Chinatown businesspeople protested and the second phase of the project was blocked, but not before Hogan's Alley was lost.

If you go to this page and click on the map sections marked in colour, you can get a sense of what the old neighbourhood looked like-the city documented the properties that made way for the viaduct. (207 1/2 Union Street is not listed among these, as it still exists.) It's a crying shame that these beautiful buildings were lost. I am glad the city decided that Chinatown was worth protecting and declared it a heritage site last week.

You just never know what you're going to find in this city, hidden in plain sight. What started out as a photo date with a friend turned into a history lesson for me and all because of a weird little shrine to Jimi Hendrix.

This is totally fascinating!! What a cool thing to stumble upon. Thanks for sharing all this :)

Wow. I had no idea. I had no idea there was even a "black" neighbourhood in Vancouver, ever. We have to go back there next summer to find out what the heck was in there! WE MUST! We must have the "experience". LOLS.