Way back at the beginning of the year, I signed on for a couple of photo collaborative projects. The two I was interested in weren't happening till the end of the year-one in October and in late December.

The theme of the one that's due at the end of this month is Portals and Gateways. I love old doors, so I really wanted to do this one. The thing is, I had no idea it was going to turn out to be as much work as it was. 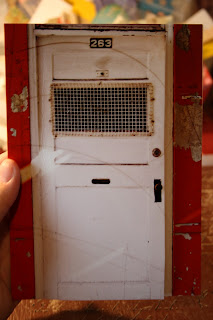 So the idea is that each person makes 26 pages, using a 5x7 photo of a door. I shot this one a couple weeks ago, in Chinatown. I love this door. I love the chipping red paint of the walls that flank it, I love the creepy metal grate over the window and most of all, I love the style of the numbers. 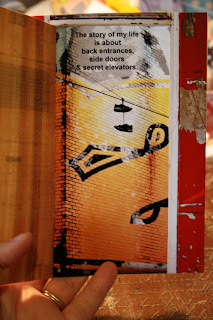 The door is cut to open, the back of the door covered with paper, so you're not looking at a blank white space. Behind the door is another photo, with a quote pertaining to the theme.

I chose to use a layered photo I made from two images also shot in Chinatown-the graffiti number 32 I found in an back lane and a pair of runners tossed over a wire in another back lane.

"The story of my life is about back doors, side entrances and secret elevators."

It seemed perfect for this project. 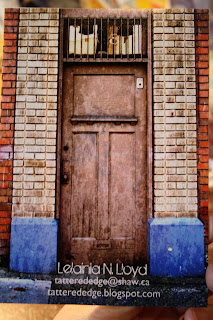 On the back we were supposed to put one more image with our contact info. I chose a second door I shot that day in Chinatown. This image has be altered. To the right of the door was (in reality) a window, which made the whole image look off kilter and not very pretty. I finessed it by cloning the brick on the left hand side and putting it up in place of the window. You'd never guess that this isn't how the building really looks in real life, would you? I'm becoming my own architect through the magic of digital editing! All three of these images were work I did in Swan Dive. I've got mad skillz now!

Anyway, it all seems simple enough, except that in order to fabricate 26 of these 5x7 pieces, it required an insane amount of careful cutting, gluing, double sided taping and meticulous matching up of edges. Challenging for anyone, but ridiculously so for me.

You see my hands have deteriorated once again, due to nerve damage in my spinal cord from MS, so doing anything that requires fine motor skills has become extremely difficult once more. It's been hard for a long time now, by by and large since I first lost feeling in my hands 4 years ago, my brain has adapted to the changes. Now, with what seems to be fresh damage, I feel like I am back at square one again.

Yesterday night, I sat for hours applying double sided tape and then trying to find the edges of the paper to peel it off. Then I had to ever-so-carefully line everything up and stick it down. It took forever and it became the project that almost broke me. It was NOT fun. It was like torture and I could not wait to be done. I sat here verging on tears and madness. Imagine trying to peel double sided tape with oven mitts on and you get some vague idea how frustrating it was.

In any case, because I am me and giving up is not in my DNA, I grit my teeth and by sheer force of will, got the job done. I sent them off this afternoon. I'm hoping the payoff is worth it.

Some people do art as a passtime, then there are the diehards.
I may be changed by what happens to me, but I refuse to be reduced by it.
at 9:30 pm

So sorry to hear about the trouble you are having with your hands. I do so admire your dedication and persistence. And what an accomplishment to have done so many of those pieces for the project. Good on ya!