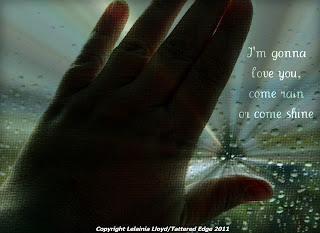 Light Hunters: Getting Through the Grey started yesterday. I'm still in a bit of a fog after the crazy busy week that was volunteering at the 2011 Grey Cup, but I still managed to work on my first image, as you can see. I think that's one of the best things about photography for me-it's completely accessible. (By which I mean that no matter how cruddy or exhausted I may feel, I can still pick up my camera and be creative, with minimal effort.)

Come Rain Or Come Shine* is another in a series I am calling Postcards to Myself, though I suppose it could also be counted as part of my hands series as well. Two birds, one stone!** I shot this during the storm we had over the weekend. I'm one of those people who loves a good storm. We've sure had our share of them in November. It's been a very blustery month on the west coast of Canada!

There are only 33 days left of this year and I'm looking forward to compiling all the images I shot in 2011. I have plans to share them here on my blog on New Year's Day, so keep your eyes peeled.

I was in a state of bliss when I saw that my classmates had begun posting images yesterday afternoon. I love the creative energy of Viv's classes. I love that we show up not only for ourselves, but for one another. As I've said before, my learning experience is directly affected by the work that my classmates do-I get inspired by them and it raises my game, which is wonderful. It's not about competition at all-far from it! What it does is it empowers me to be a better artist-to dig deeper, to take risks, to experiment.

Another thing I love about these classes is that even if there are 35 or so artists involved, everyone's visual and creative voice is uniquely their own. Through photography, we're celebrating those things that makes what each of us special. I find myself scrolling through my classmates work and saying "WOW!" alot. I sit here and dissect why things work and which elements create the magic. Every photograph is a lesson.

This edition of Light Hunters runs through to the end of February.
It's going to be an interesting winter

*Lyrics from a Billie Holliday song.
**Who made up that idiom anyway? It's pretty barbaric!

Labels: classes, Getting Through the Grey, hands, Light Hunters, photography, post cards to myself series, self-portraits