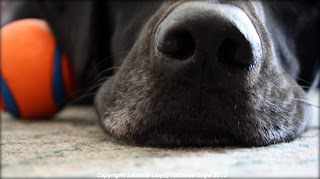 Yesterday we had clear blue skies and glorious sunlight. It was hard to believe we were verging on December, when it felt more like early October.

At one point, I walked into the livingroom and found Indy napping in a puddle of light on the floor. Indy's a light hunter in his own right. He permitted me a few photos before he'd had enough of the soul stealing camera. I've learned I have to shoot quickly with him. 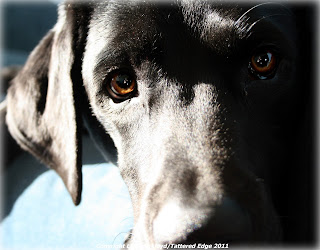 Indy has the most beautiful coat. He's incredibly shiny. (Which you can see by the way it reflects the light in this photo.) People always comment on it when we're out with him. I've said it before, but I'll say it again: He's gorgeous. It's a wonder he doesn't have a fat head for all the times he hears it. *grins*

Anyway, these were my shots for Getting Through The Grey yesterday.
at 4:39 am

Labels: Getting Through the Grey, Indy, Light Hunters, photography

I *love* these. That nose is very expressive. Indy really is gorgeous.

Those are some soulful eyes, all right. :)