Getting Ready For the 99th Grey Cup

So back in the summer, when I was volunteering at Vancouver Summer Live, I happened to run into someone I'd volunteered with at the 2009 World Police and Fire Games, on the transportation team. (We were dispatchers for the fleet of cars for VIPs.) We shared a shift together checking in Volunteers at Summer Live and in between waves of people, we chatted about where we'd been volunteering since. Gerald mentioned that the Grey Cup was coming to Vancouver and they were looking for people. When I went home I went online and signed up.

Fast forward to this past Saturday, which was the orientation for the transportation team. We met in an office building downtown. The first half of the session was going over the volunteer and driver's manuals. I didn't see Gerald (I think he's involved in a different department) but I did spot Laurie, whom I also met at the World Police & Fire Games and who volunteered at the Stadium during the 2010 Games as well. We keep running into each other-I guess we're diehards! It's kind of nice to have a friendly face in the crowd.
Afterwards, we went upstairs to get out photo taken with the Grey Cup. Now this isn't something I would necessarily normally do, but they had arranged for this to happen and after the Grey Cup is over, they will be sending us our photographs as a thank you. I have to say that it was kind of cool to get to touch a 99 year old piece of Canadian history. 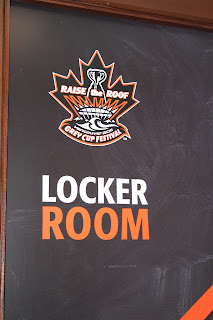 (The door leading to the room where the Grey Cup was housed and where we picked up our uniforms.)

While it's treated with a certain amount of respect, the Grey Cup is not like the Stanley Cup-there's no guy (that I saw anyway) travelling around with it to guard it and you do not have to put white gloves on to touch it. In fact, when they took the photo, I had my arm around it. While the Stanley Cup is like a flashy diva, the Grey Cup is more like a cherished old friend. 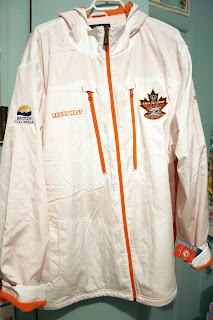 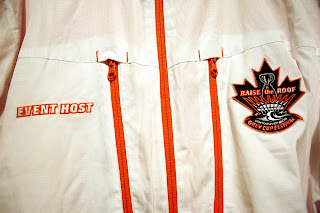 After the photo was taken, I rounded the corner to pick up my uniform. They gave me an orange bag the size of a small suitcase loaded with goodies in the official Grey Cup colours: orange, white and black . When I got home, I unpacked it. Inside was a white jacket an orange toque, and a black and orange fleece, made by Reebok. They are really nice-I especially like the jacket. 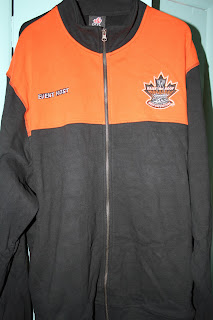 My fleece is miles too big-the sleeves are about 8 inches too long and it fits me like a dress, so I will have to exchange it for a smaller size.(Which shouldn't be a problem.) 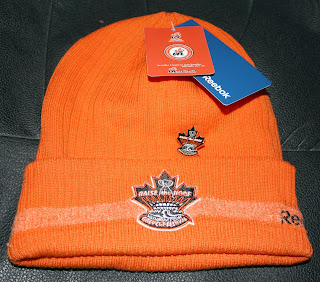 The toque is adorable and cozy. The little logo you can see is a commorative pin. (I'll show a close up a little further on in this post.)
Anyway, there are going to be a ton of fun things to do at the Grey Cup Festival. There's going to be a big parade on the Saturday and the Grand Parade Marshall is local boy, Corey Monteith who plays Finn on GLEE. There's the Vanier Cup, which is the college division football final happening on the Friday night of Grey Cup weekend. They generously gave each volunteer a pair of tickets for that and the hometown team UBC has a good chance of being in that final. They have one more game to play until we know for sure.

There will also be pancake breakfast-one put on by the Firemen (for charity, I believe) and two by The Calgary Stampede (both Friday & Saturday) for free. There's a ton more things happening-parties, music, a cheer off (by CFL Cheerleaders), contests and so much more. There will be something for everyone and the festival is family friendly. If you're local and want more info, you can view events by date or events by venue. The festival homepage is here.


Sunday afternoon is the Grey Cup game and right now the BC Lions have an excellent shot at being the Western Division champions, so it may be the hometown team playing! *fingers crossed* The only thing that would make it even more exciting is if the Winnipeg Blue Bombers get to represent the Eastern Divison. (Of course then there's going to be trouble 'cause if the Bombers are playing, you know I'm going to root for them. You can take the girl out of Winnipeg, but you can't take Winnipeg out of the girl! I root for the Lions as long as the Bombers are not involved!) There are 2 games to go till we know who's playing for the Grey Cup. 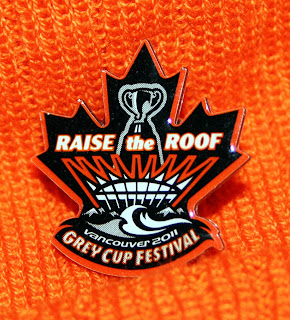 Here's a close up of the pin, as promised. It depicts BC Place Stadium as it appears now that we have the fancy retractable roof on it, along with the mountains and ocean, which are synonymous with Vancouver. We're raising the roof with the 99th Grey Cup-it will be the first major event to take place since the renovation.

Well will you look at that-if you didn't know me, you'd think I was some big football fan or something! Truth is, while I enjoy going to see the odd game, the Olympics are really my sports thing. I volunteered for the 99th Grey Cup because I love this city and it's my pleasure to serve and give back. I always learn alot and I love helping people. The delicious irony of giving is that the more you give, the more you get to keep for yourself and the best part of what I get to keep for myself are the memories of some very wonderful experiences. For me, those experiences are what make my life so rich.

Thank goodness for the volunteers like you...these events would not have the same quality without you...have fun..Go Lions Go lol

What fun you must be having!! Enjoy!!!