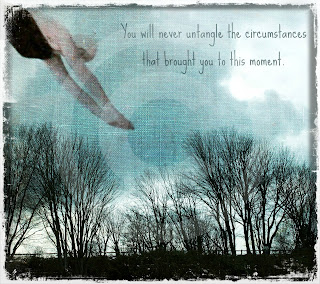 When I was 16, I lived in Barcelona, Spain. One day, I visited the Monserrat  monastery,  high up in the mountains. (This photo gives you an idea how high up it was.)

On the day that I was there, the monastery sat well above the clouds. Standing there, looking down at them gave the illusion that the monastery was a peninsula, jutting out into the endless white fluffy ocean of clouds below. I kid you not when I say that the idea of diving off the cliffs into that ocean of clouds momentarily crossed my mind. (Of course I didn't actually do it-if I had, I wouldn't be telling this story to you now. But if I'd had a parachute...)

That place was magical and I think that some fragment of that memory was forever lodged in my brain and this is how it resurfaced, 25 years later.
Creativity is such a mystical thing.