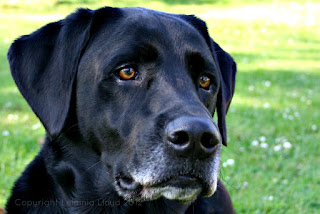 Last night I went into the city to meet with my med students. I didn't have my phone because it's pretty much on its last legs and I need to replace it. Anyway, when I got home, my husband and Indy were out. Indy's leash wasn't hanging on the back of the door, so I knew they had gone for a walk.

I wasn't home more than a few minutes when my nephew came to the door, asking if they'd come back yet. His questioning was so odd, I asked him what he was talking about and he said "They didn't call you?!" I told him no, because I didn't have my phone and than asked what was wrong. He explained that they had been attacked.

I immediately got on the phone and called my husband. They were at the vet. He'd been walking Indy and out of nowhere, a pitbull/mastiff cross who was being walked by a woman on the other side of the street they were on went nuts and broke free of his owner. The dog crossed the street and attacked Indy. Pete had to kick the dog continually to try and get him off Indy and at one point he fell down and was lying on the ground. Eventually it stopped. He called our son who came to pick them up and take them to the vet.

Pete called a friend of ours who works for a vet because he didn't know what else to do. She came over and was a huge help in helping him deal with everything. She even dashed home to get him tea and some cookies because he was in shock.

Indy had puncture wounds to his ear, cheek and chin. Our friend said the fact that he has such a thick coat and ruff helped him escape worse injury. I know that it's because my husband defended him that it's not worse. They had to sedate Indy and then stitched him up. He came home very groggy and with antibiotics. He was pretty shaky, which broke my heart. I hate seeing him in distress. He'll get the stitches out in 14 days.

The owners of the other dog were horrified. I am sure they are not bad people. They immediately stepped up and gave the vet their credit card info to cover all the costs of Indy's care. I am extremely grateful for that. We would not have needed the added stress of having to go after them for it. The vet said that usually people do not take responsibility. The bill was over $500.

Pete brought Indy home and I stayed with him while our son took my husband to the ER to be checked out. I made him go because he is still recovering from major surgery and I wanted to make sure he didn't have any internal injuries. His right arm is extremely painful. He has to go back later this morning for an ultrasound to see if he's popped his bicep. I think he has. It's very swollen.

He's very sore and stiff this morning. He didn't sleep well. He feels terrible about what happened, even though it wasn't his fault-it's just one of those things. He was mostly upset because he knew I'd be upset. He knows Indy means everything to me. I am just glad they are both going to be okay eventually and that it wasn't worse.

Indy is still pretty quiet. He slept most of the night. Hasn't eaten anything yet, but at 8 am, I have to give him antibiotic pills, so I will make him an egg, which he loves to get him to eat something so he takes his pills.

I'm running on about 3 hrs. sleep and my head is pounding. We didn't get to bed till 1 a.m. Everyone's going to be lying low today after we get back from the hospital and probably trying to catch up on sleep. Last night was pretty traumatic.

I think we've officially reached our limit on just how much bad stuff we can handle, thank you very much. Enough already!

Thank you to everyone who has sent emails of support and good wishes for Indy & Pete last night and this morning. Much appreciated. xo
at 7:20 am

You poor things, all of you. This is too much. But thank god it wasn't worse. I am really hoping poor Pete's arm isn't too severely damaged. I am glad his surgical site wasn't damaged. Lay low, drink cocoa or something soothing and take care of each other. Sending you healing thoughts across the miles. <3
Also, special thanks to the people for stepping up and taking responsibility for paying for the bill. Back when I had beagles, someone ran my dog over, and drove away. Jerks.

I am so sorry to hear of the traumatic walk both Indy and Pete had. I do know how you feel about Indy. I had a beautiful golden lab 15 years ago. He was an incredible friend. I will say some doggy prayers and Pete prayers and some Lelainia prayers to all of you. Indy is such a beautiful dog. I can tell how much he loves you. Bless their healing process. Lynn

I am so sorry to hear about Indy and hope your husband will be fine...I cant imagine the stress you are going through...good thoughts winging their way to you...take care...

Keeping my fingers crossed Lelainia that everybody is healing nicely.