So this past weekend marked the 146th birthday of our great nation. We celebrated Canada Day on July 1st. Usually this holiday is pretty low key in our house-we tend to just do some hiking and BBQing and that's about it. It ended up busier than I had originally anticipated. 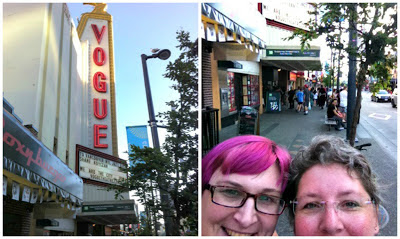 Sunday evening, my pal Jenn and I went to see Shayne Koyczan at the Vogue. As I mentioned before, I won tickets from the Vancouver International Jazz Festival. I have to tell you, this was an amazing experience. Jenn and I arrived early to pick up the tickets at the box office and then we lined up. While we were standing in line, this woman came up to us and asked if we'd be willing to do an on camera interview of our thoughts about Shane Koyczan. They were filming with plans to put the interviews together as a video at some point. We thought it would be fun and since we both adore him, we said we were in. It was pretty funny and I can't wait to see what they do with the footage. Funny that I seem to be doing alot of TV lately.


Eventually, we were let into the theatre. The seating was rush seating and since were at the front of the line, we easily got seats in row two, up front and center. Shane ended up performing for THREE HOURS. He is not only a gifted poet, but also incredibly funny. I laughed so much my face hurt. His band was incredible and I was so happy there were so many strings-cello, base, guitar and violin, along with keyboard, trombone and trumpet. The beauty of combining spoken word with music is that the music beautifully underscores the words and adds another layer to the emotion that is being expressed. It's an experience like no other.


The Vancouver International Jazz Festival has never had spoken word poetry as part of their line up. It's really cool that they decided to take a chance to include it.  Seeing Shane Koyczan, whom I consider to be one of Canada's national treasures was the perfect way to celebrate the Canada Day long weekend. 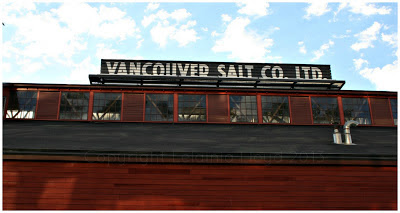 While Jenn and I were having dinner before the show, I got a message from the good people at False Creek Ferries. (The company that runs the ferry service we often ride from Science World to Granville  Island. It's one of our favourite things to do.) Awhile back they invited Rick Mercer to join them on Canada Day for their traditional ferry ballet. (Think Musical Ride, only on water, using ferries instead of horses.) I told them half jokingly that if Rick Mercer didn't want to do it, I did. Well, Rick Mercer never got back to them, so they very sweetly extended the invitation for me to join them. Of course I said yes! 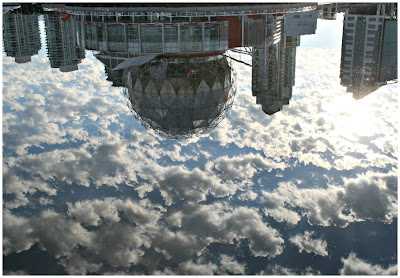 I got home pretty late from the Vogue-1am and didn't get to sleep till 2am, but still managed to get up for 5am so I could get downtown in time. The morning was so beautiful. This photo is the reflection of Science World in False Creek. The water was like glass. It was so peaceful. 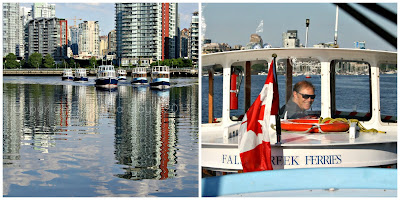 I waited at the dock at Olympic Village and at about 7:30am, a fleet of 6 ferries came to get me. Nothing like a fleet of boats turning up to make a girl feel special! I hopped aboard and we were off. The manager of the company (in the left hand photo) was calling the manoeuvres via radio.

The ferries did figure eights, various lines and circle sequences in several locations along False Creek. People were watching from shore or out on their boats, clapping, waving flags and shouting "Happy Canada Day!"

We made our way up to Granville Island over the course of about an hour and a half. There was a cooling breeze and I was shooting photos, laughing and waving to people the whole time. Rick Mercer has no idea how much fun he missed!!

When we arrived at Granville Island, Jenn was waiting there for me! We hung out till I caught the ferry back to Olympic Village. A HUGE thank you to False Creek Ferries for making my Canada Day so special. You guys are THE BEST!!

This week is going to be quiet, which is a good thing-the past 2 months have been an absolute whirlwind!
at 10:33 am