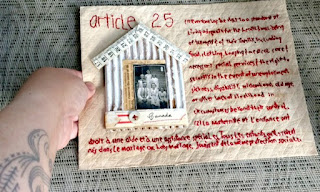 Hello again! I am back. I've taken a good chunk of 2017 off due to illness and most recently the loss of someone very dear to me. Today seemed like a good day to jump back in and share a new project with you.

Back in late May/early June, Tal Fitzpatrick & Stephanie Dunlap put a call out for an international collaborative craftivism project aimed at highlighting the Universal Declaration of Human Rights and bringing awareness to the ways in which it is being violated around the world today.

I knew immediately I wanted to participate in this endeavour. It's not the first time I have taken up needle and thread and created something to share with the world like this. 15 years ago, I participated in the United in Memory Quilt Project to memorialise those lost on 9/11 and it changed my life.

It took me about 3 weeks to complete my block for the UDHR project. I knew it would be challenging stitching with hands I can't feel (imagine stitching with a pair of oven mitts on and you'll have some idea what it's like) but I didn't realise the impact my vision would also have. Let's just say this piece is likely my last stitchery project and given the level of difficulty, a true labour of love.

I chose to work on Article 25. This is how it reads:

(1) Everyone has the right to a standard of living adequate for the health and well-being of themself and of their family, including food, clothing, housing and medical care and necessary social services, and the right to security in the event of unemployment, sickness, disability, widowhood, old age or other lack of livelihood in circumstances beyond their control.

(2) Motherhood and childhood are entitled to special care and assistance. All children, whether born in or out of wedlock, shall enjoy the same social protection.

This is the story behind my block, which will help you to understand why I chose Article 25 and the inspiration behind the design.

"Like all Canadians, with the exception of the First Nations People of our country, I am descended from immigrants. My people came to this country I imagine, for a better life for themselves and their children. As I read the words of Article 25, I couldn’t help but think of my great grandfather, Einar Nowell and his life-long struggle with his health, which in turn led to struggling to support his family.

Grandpa Nowell was a baker by trade. He worked for the Pauline Chambers Company, one of Winnipeg’s largest suppliers of baked goods. Unfortunately, over time, he developed a severe allergy to wheat. The more he worked, the sicker he became until he had to stop working. This left him with no means to support his wife and 6 children, save for going on what was then referred to as “relief”, which is now known as public assistance or welfare. After being away from the allergy inducing environment of the bakery for a few months, he would start to recover. Once he was well enough, he would return to work until he became too ill from his allergy to continue and the cycle would start all over again.

My grandmother, who was the eldest child told me stories about how desperately poor her family was. A small can of Libby’s spaghetti was expected to feed her entire family of 8. When she was in school, her lunch consisted of a lard sandwich-which is exactly what it sounds like-two pieces of bread with lard slathered on it. Once I asked her what presents she got for Xmas growing up. The only gift she ever remembers getting was a pencil and a hanky.

Eventually it became impossible for Grandpa Nowell to continue on at the bakery. Around this time, the government was giving farm land to people who were on relief, with the idea that they could work the land and provide for their families. Grandpa Nowell moved the family to Anola, Manitoba, 24 km east of Winnipeg. He worked the farm for years. When my grandmother was 17, she moved to Winnipeg for a job at the grain exchange and sent most of money she earned home to her parents help support the family.

On the morning of Feb 15, 1971, Grandpa Nowell told Granny that he had a feeling that the kids were going to come home that day, so he was going to go plow the drive to clear the snow. About an hour after he’d gone out, Granny looked out the window and saw him leaning over on the tractor. She went to see what was wrong and discovered he’d died of a heart attack. His premonition turned out to be correct; his children did come home that day. He left this world 5 weeks before I came into it, missing the birth of his first great grandchild whom he was so excited to meet. I am named in memory of him.

The artwork on my block is in honour of Great Grandpa Nowell. The photograph is of him and my Great Granny and four of their six children.( My Grandmother, Verna is the tallest one in the middle of the back row.) The button is for my Great Granny, who was a seamstress and the piece of measuring tape is from the 1940’s and belonged to my Grandmother Verna. The scrap of paper underneath the photo reads in part “removes of ill-health”, which I thought was fitting. The house is made from a scrap of cardboard, to represent poverty.

In many countries around the world, there is absolutely NO social safety net and for those that do have one, it’s often woefully inadequate. The simple truth is that poverty kills and no country is immune."

There are going to be 4 quilts, each containing all 30 of the Articles. Each block has been designed and created by one of 120+ artists from over 23 countries around the globe who have a story to tell. This is mine.

It's been very comforting, especially given the current political climate to know that there are so many artists who care about what's happening in the world and are doing what they do best to help raise awareness and bring healing. I am especially touched by my fellow artists who live with chronic illness and disability who are participating. There is strength in numbers and I feel the love and solidarity in everyone's work. I know the completed quilts will be incredible.

To learn more about the UDHR Quilt Project, please visit Tal Fitzpartick's website here. You can see many of the blocks in progress and also those that have been completed on Instagram by searching #UDHRquiltproject & #UDHRquilt

Lelainia - your work is just stunning. What a fabulous post, with the back story and the close ups of the work. Thank you for making the tremendous effort to get this one done. You'll be so proud to be a part of this project. I can hardly wait to get to see it all on display. Brilliant idea. And I love Article 25 that you chose too. Well Done.