Hello again! I haven't updated "the list" in awhile, so here's what's going on lately:

Creating: I'm working on a number of projects at the moment, one of which is the second edition of Manual Dexterity Zine for the annual zine exchange. Here's the very beginnings of that project: 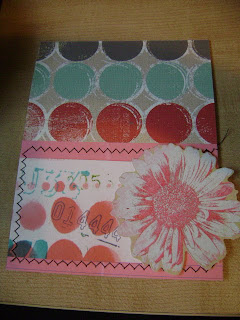 Pages for my zine, in progress. 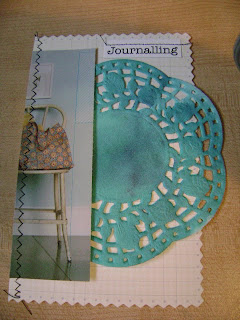 Yes, I am sewing them ROD style because who doesn't love sewing paper? Obsessed? Yesiree! 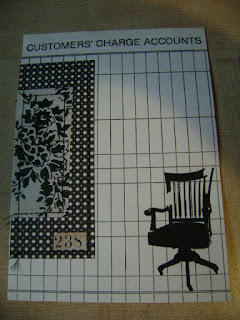 I particularly like this one. Simple but the clean lines gives it punch.


Reading: Right now I'm 3/4's of the way through Psychovertical by Andy Kirkpatrick. Yet another mountaineering book. (Another obsession!) Next in line is Dancing on Ice: A Stirring Adventure, Risk and Reckless Folly. How's that for a title? According to the write up this is what it's about:

"In 1930 the dashing Gino Watkins led a group of fourteen intrepid and largely inexperienced young men (including the author's father) to pioneer the first commercial air route between Europe and America. Alongside high adventure, triumph and tragedy, Scott paints a stunning portrait of two lost worlds: the Inuit hunters of the polar regions and the Brideshead generation of English men addicted to adventure.

One member of the expedition was stranded alone on the ice cap for five months, for much of the time in total darkness. Blizzards raged continuously and temperatures dropped to -41°C. For six weeks he was utterly trapped in an ice cave, unable to get out as his companions mounted a desperate, last-ditch rescue attempt."

I tend to read alot of mountaineering, polar exploration and iditarod books. Anything about ice and snow adventure engages me.

Watching: Hmm..let's see...Breaking Bad, Glee, Ice Pilots NWT and HOUSE just wrapped up. Deadliest Catch and Ice Road Truckers are still on. I am also watching So You Think You Can Dance and a brand new mini series that started last week called Persons Unknown. It kind of reminds me a bit of The Lost Room. (Which I loved.) I think they are shot in a similar manner.

Listening: The last couple of days I've been going through my mixed CD collection (which is extensive) and ripping tracks I want to keep and culling the herd. I added a whopping 270 new tracks to my iTunes library. *boggles* My friend Penn offered to take all my cast-offs off my hands, which is great because I'd always rather re-home something rather than turf it if I can. (Being a Tree Huggin' Granola and all.)

Dreaming: I'm in the process of planning a trip we'll be taking later this year to celebrate our 20th wedding anniversary. I am really excited about it and I think it's going to be a really good time. Can't wait!

Anticipating: Going out for lunch with friends and hanging out with my artsy peeps on the weekend. Simple pleasures are the best.

In other news, I was asked to do an interview for Shared Voices which is the MS Society's Lower Mainland Chapter newsletter. The interview was about my Olympic and Paralympic Torchbearer experience.
Here's a peek: 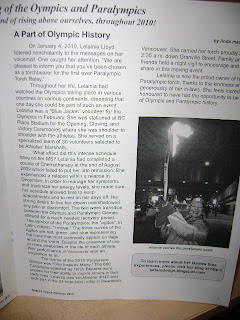 I've been busy the last few days tending to Indy, who developed an eye infection on Monday. Poor little guy was pawing madly at his eye. I got him in right away to see our lovely vet (he's the nicest man and sadly, he's about to retire) and after being so good about sitting still for an eye exam that looked horribly uncomfortable to me, he got some medicine. I have to put ointment on his eye three times a day and while it's not his favourite thing, he's good about letting me work on him. It's starting to look like the medicine is working, which is a relief because it breaks my heart to see him suffer. He should be healed up by Sunday, hopefully.

So...that's what's going on in my little corner of the world.

How did I miss so much? I never saw your post about receiving your zines forever ago...you got one of mine!! (I didn't get one of yours...:(

I wonder why I didn't receive an update for the zine exchange...I'm pretty sure I'm on Alma Stoller's mailing list? I'll have to check it out.

I love your sewn pages...so cool. Makes me want to bust out my sewing machine! Someday I WILL take a ROD class...someday!

What a fun project re: zines. Isn't sewing paper addicting? I never realized how delicious it is to do so until ROD. The book sounds like a good read. I will have to check it out. How is sweet, little Indie feeling? Poor guy. xoxoxoox