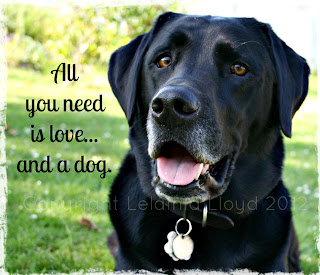 Summer has finally arrived on the west coast of Canada. Truth be told, I'm not a fan of the heat and this past week has been pretty hot! Indy's taken to lazing in the back yard any time the back door is open to help cool the house. (We get a nice breeze coming up off the river.) 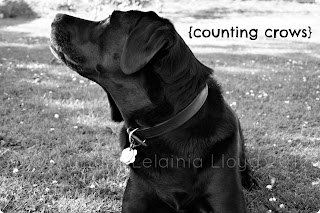 Last night I was running in and out of the house, keeping an eye on our dinner on the BBQ and Indy was rolling around in the grass being his adorable, so I grabbed my camera. I like taking candid shots of him just being himself.

Here he's gazing up at the crows in our cherry tree. If they are on the ground when I let him out, he leaps off the back porch, missing all 5 stairs to charge at them. Being a bird dog, he wants to catch them. It's a good thing they can fly because he's fast! It's funny that he has such a hate on for crows and yet when we're at Granville Island having lunch, a bird (usually a sparrow, pigeon, seagull or starling) can come within mere inches of his nose and he'll ignore it. I don't even have to say "Leave it." He has the best manners. 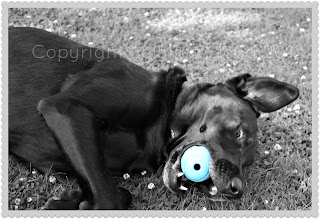 Goofing around in the grass with his favourite ball. He chews it like it's gum. It whistles when you throw it and he'll retrieve it until you think your arm is going to fall off. 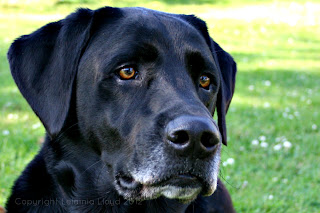 He looks like such a grown up dog here. He's gotten really good about his Mumaratzi shoving a camera in his face. He still thinks it will steal his soul, but if I set the shutter speed to the sports setting and move quickly, I can get shots like this. 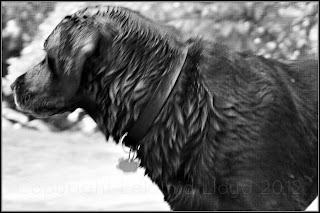 I took this one on Sunday, when we were out at Davison's Pool. Indy had just come up out of the river after a good swim. It's an odd shot, but I like it.

Hi Lelainia!
These are great shots of your beautiful pup. I am with you on the heat of summer - can't complain about the blue skies though ;)
Thinking of you as I just picked up Jesse Cook's CD "Tempest" at a thrift store for $1.00 - that's right one buckaroonie! And it's fantabulous...

Big hugs to you my dear,
Dawn