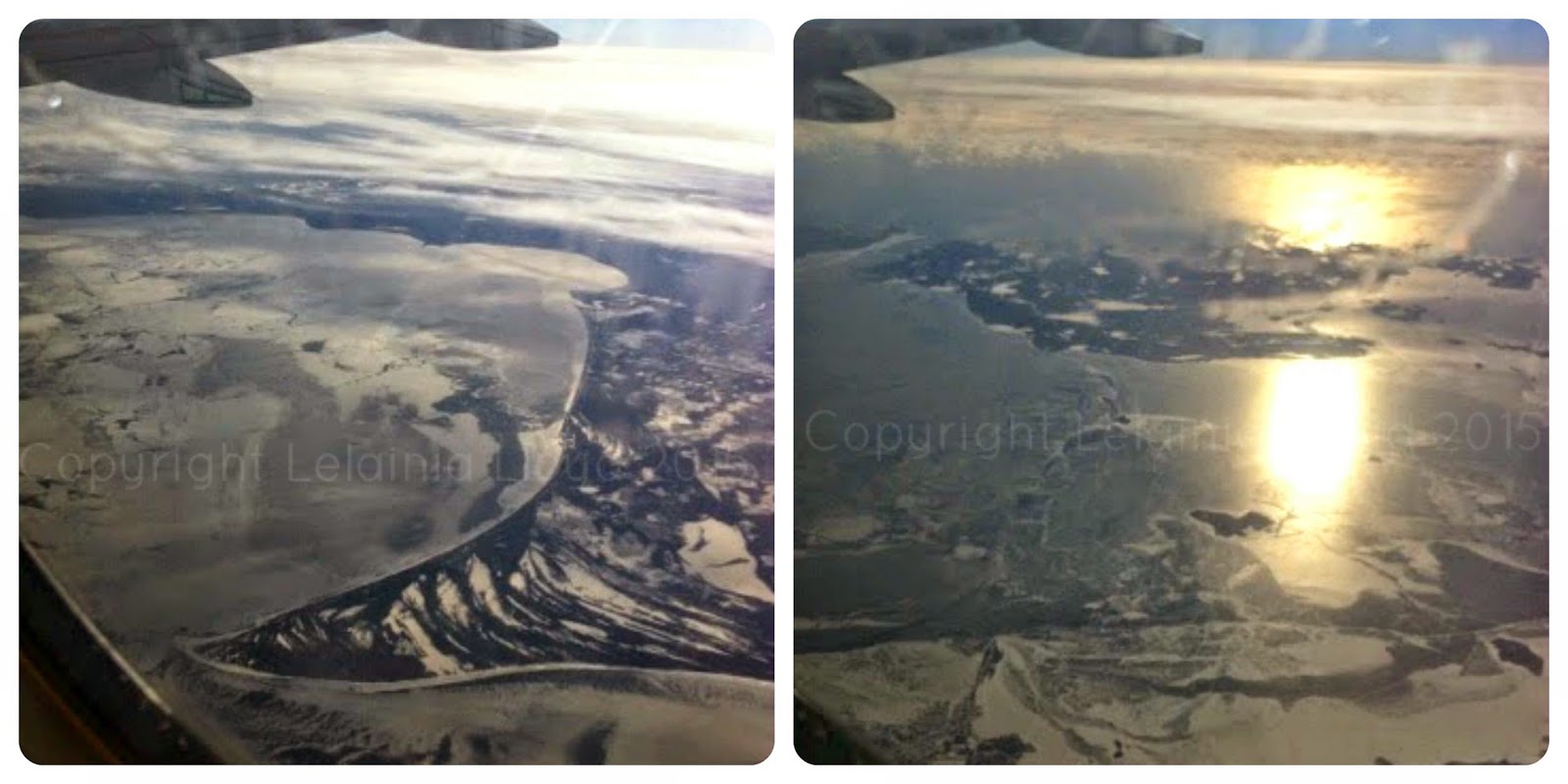 Last week I flew to Toronto to meet with the Canadian MS Society's Personnel Grants committee. It's mind blowing that it takes the same amount of time (just over 4 hrs.) to fly 3/4's of the way across Canada as it does for me to drive through the mountains to my in-laws' in the interior.

Along the way, I got to see two of the Great Lakes-Lake Superior (left) and Lake Huron (right). When we were landing in Toronto, I was stunned to discover there was no snow on the ground!! Here I'd purchased brand new snow boots just for this trip and there was nothing! It's a good thing I'd packed a pair of shoes. Crazy! 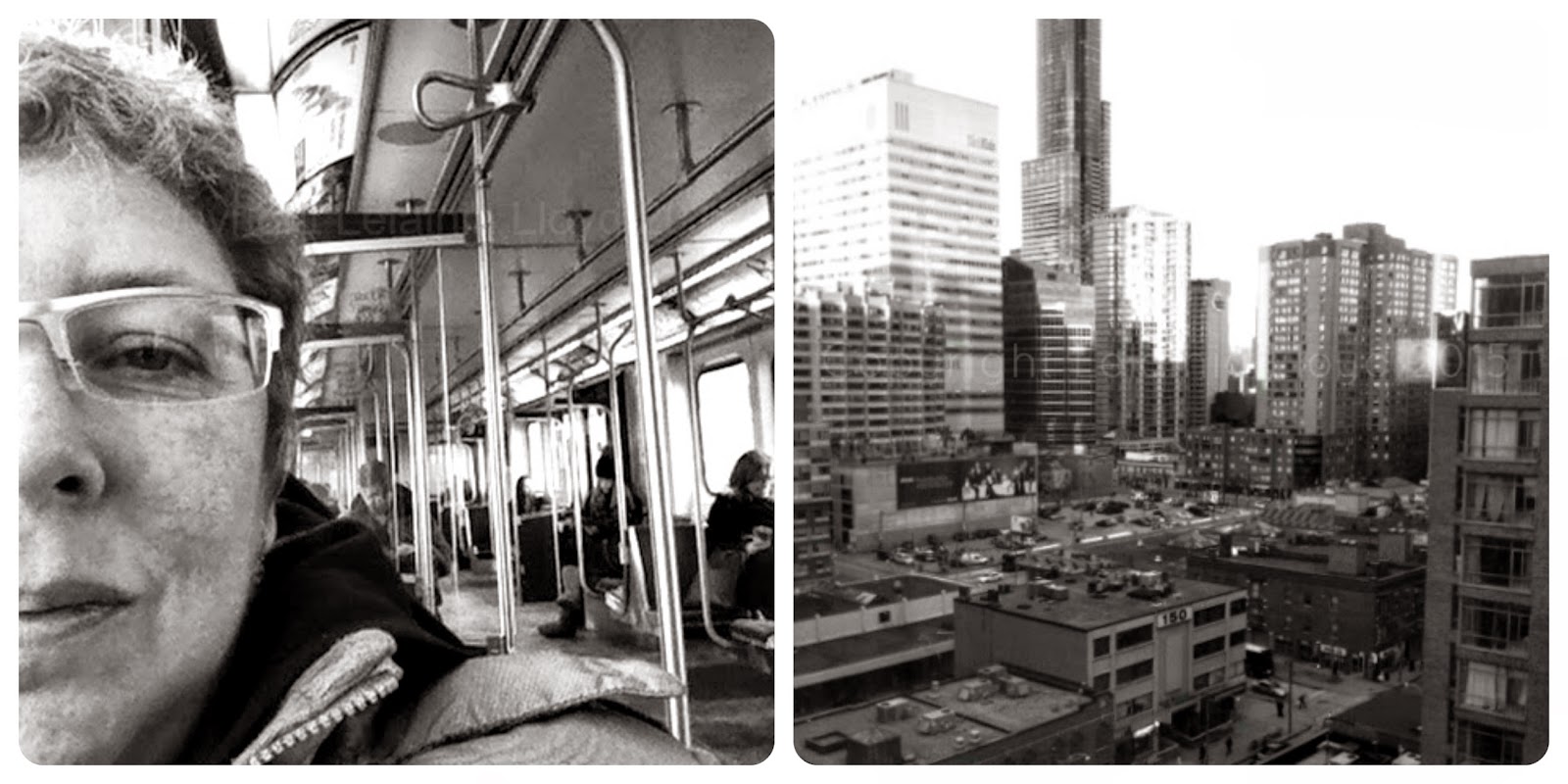 I took the Rocket bus from the airport to Kipling Station to catch the subway (left) into downtown. It reminded me alot of the subway in NYC. So different from our skytrain here-it's a much older system and runs almost entirely underground. I was also surprised that they have actual people sitting in the subway to collect fares, rather than having automated ticket machines like we do in BC.

It was about an hour from the airport to the hotel I stayed in, which was a Hilton right downtown, just a block away from St. Patrick's station. The photo on the right was my view from my hotel room.

Monday night, the Canadian MS Society took our team out for dinner at The Queen & Beaver. We had a lovely dinner and then everyone headed back to the hotel to rest up for the big meeting the next day. I won't go into detail about the all-day meeting on Tuesday-that's another post, but let's just say it was intense, hugely interesting and I came away with a full heart and a deep sense of satisfaction for the work our team did together. 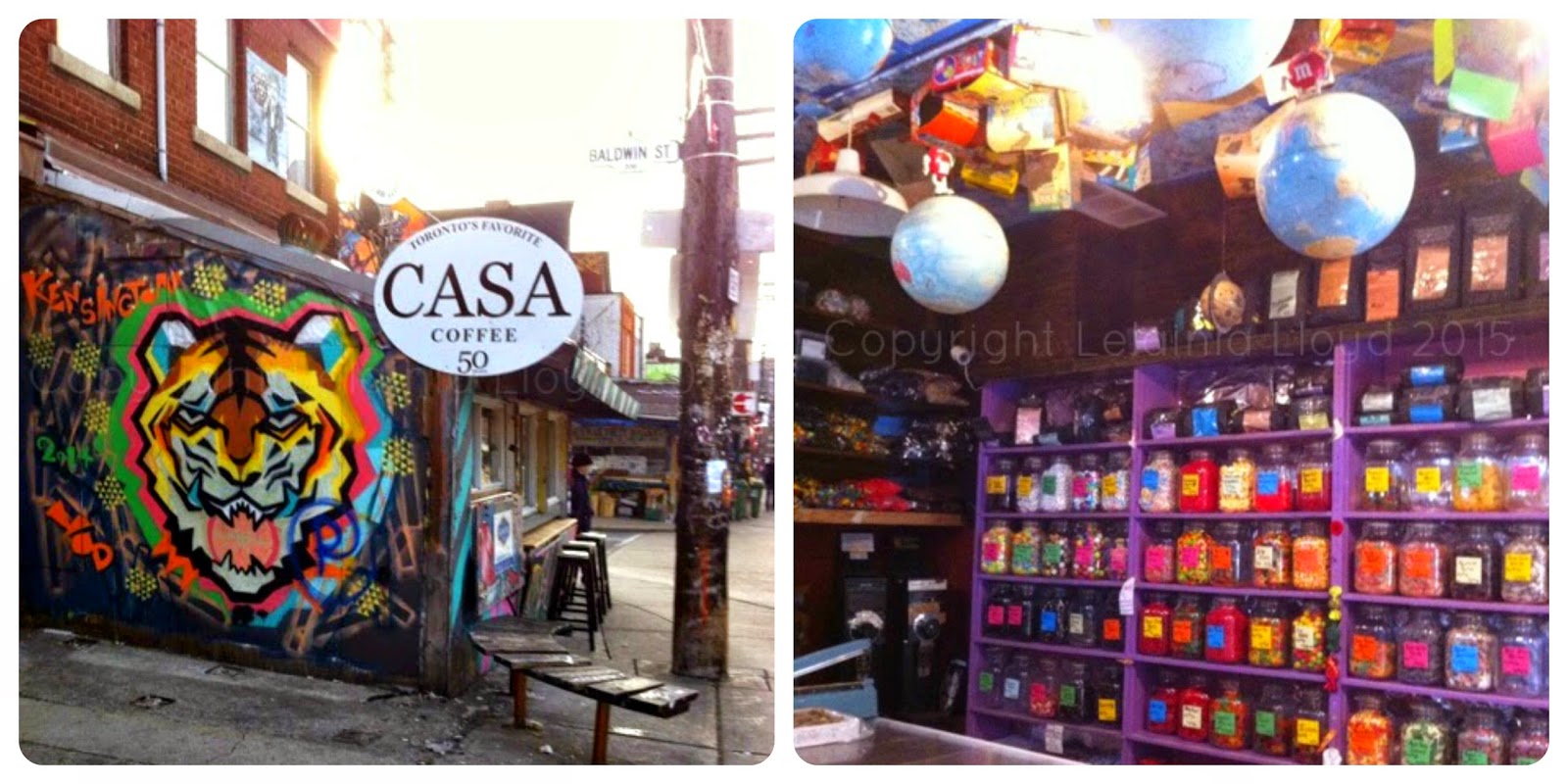 Wednesday, I had the entire day to sight see before catching an evening flight home. My friend Jenna, whom I write with on NMO Diaries lives in TO, so we finally had a chance to meet. We had dinner together Tuesday night and then she picked me up on Wednesday morning and drove me all over the city. I really appreciated her taking time out of her busy life to be my tour guide. She did a fantastic job.

We started our day having coffee (tea!) at Casa Coffee in this cool little neighbourhood. Jenna said that in the summer, they close the street here to traffic and it becomes a funky street market. I love the indie of this coffee shop-it had a whole old school candy counter at one end and the ceiling was decorated with a ton of globes. The photo doesn't really do it justice. The conversations of the locals were highly entertaining-it's such a small space that you can't help but overhear what other people are saying. I kept catching snippets of things like "She was only wearing a g-sting and a fur coat..." and "Here comes the Russian Mafia!" and "I am totally dressed for fashion week man!". I had to keep my back to the locals because I couldn't stop laughing. 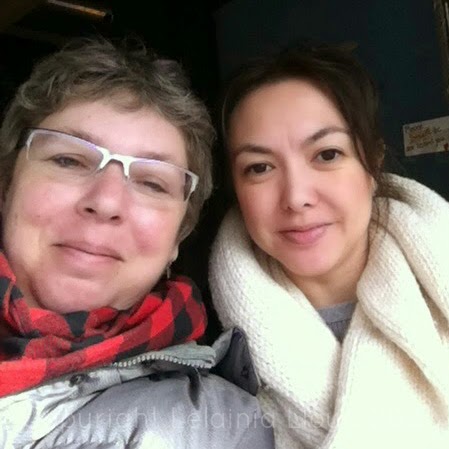 Here's Jenna and I in the coffee shop. I think I need a selfie stick! 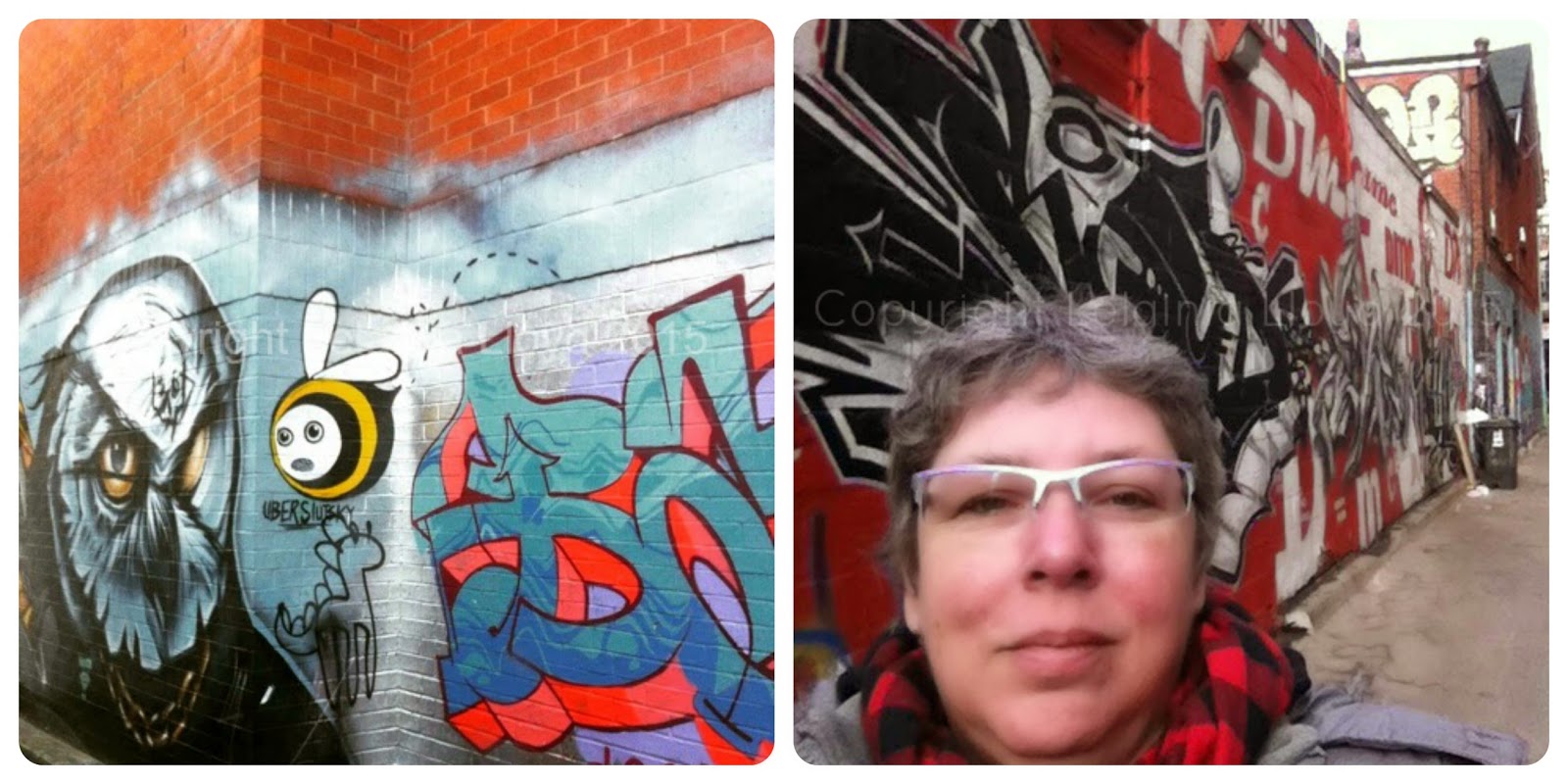 Afterwards, we made our way to the alley ways where Rick Mercer does his rants for his show. Of everything you could see in Toronto, this was the one thing I was most wanting to see. 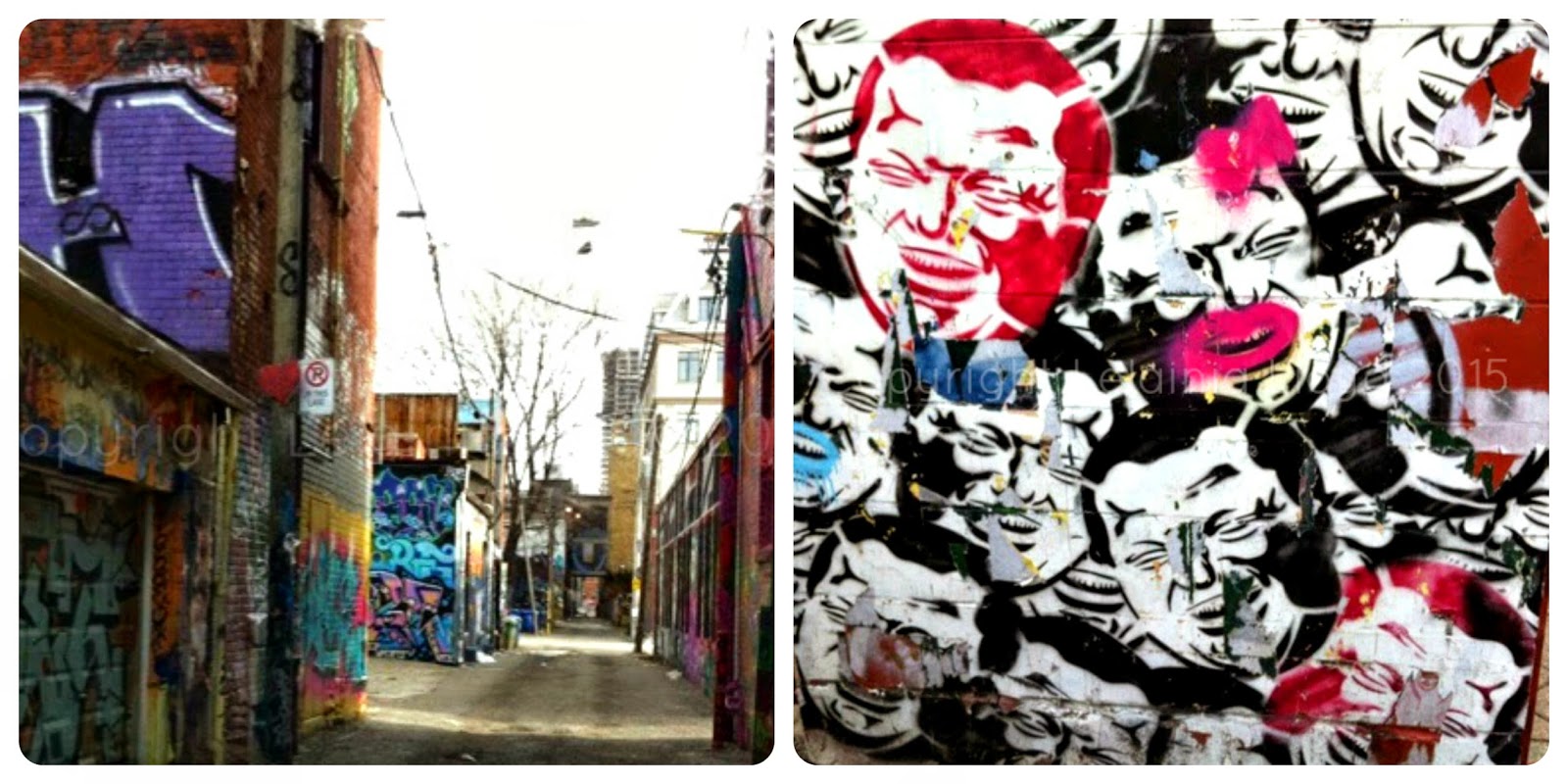 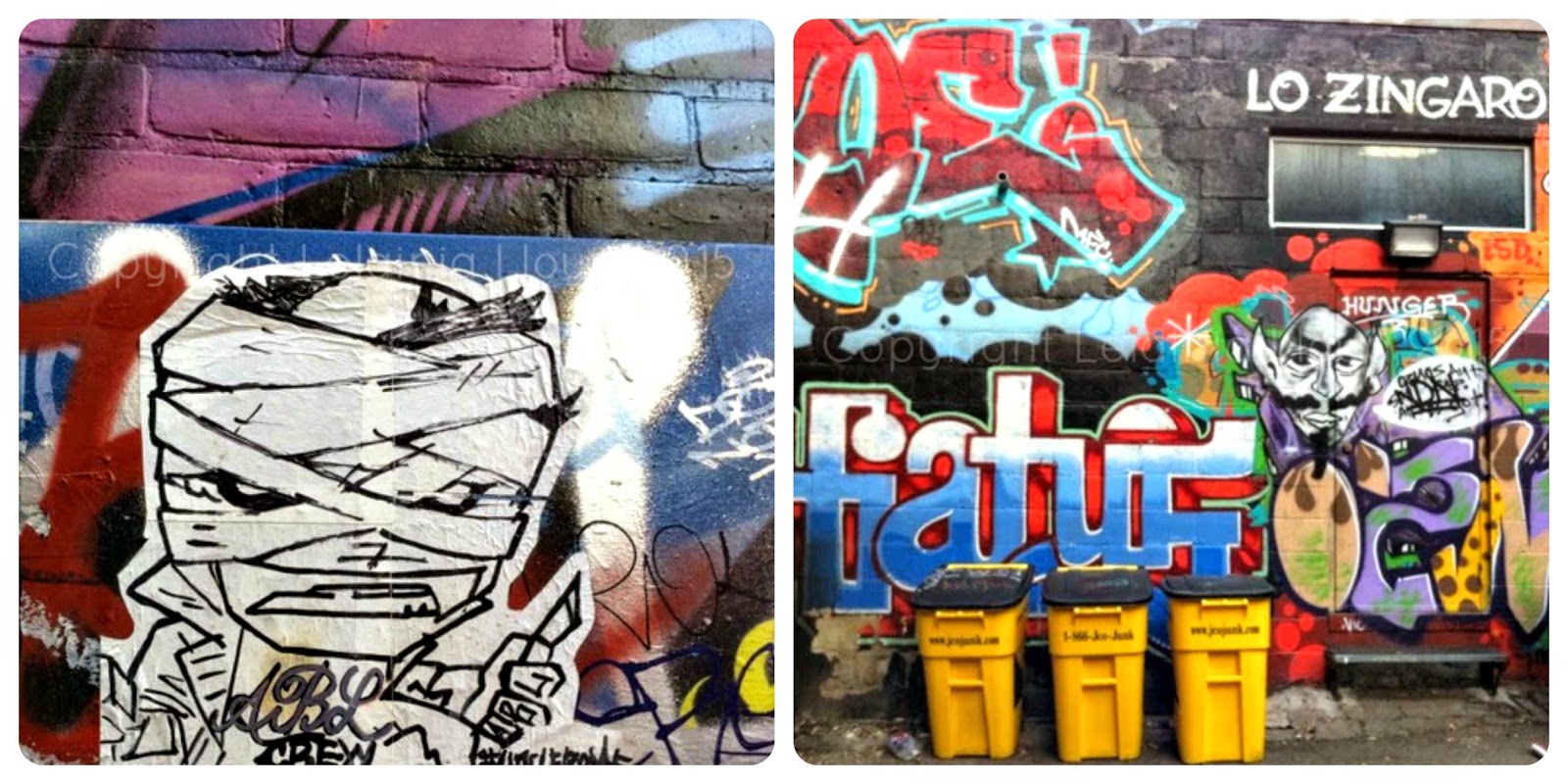 The lane ways seem to go on forever. There's so much amazing graffiti and I only managed to see a small fraction of it. Part of that had to do with how cold it was: -13C. It was too cold to be standing around for too long and taking off your mittens to take iphone photos. I might have fared better with my DSLR camera, (I can operate it with gloves on) but I opted not to bring it this trip. I did however record my own rant which I will be posting to Rick Mercer as soon as I get a chance to upload it. Silly but fun! 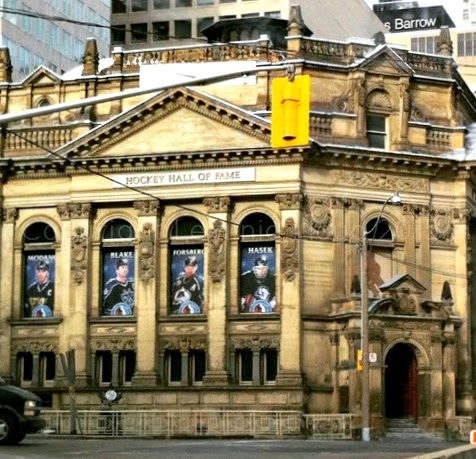 We did a drive by of the Hockey Hall of Fame, or as die hard Canadian hockey fans would call it, church. (Hockey is a religion in Canada.) Really cool building-Toronto has some gorgeous architecture.

And then there was of course, the obligatory viewing on the CN Tower. Jenna very kindly offered to take me up, but as we were sitting there on the street, the observation deck was being swallowed up by clouds. No point in going all the way up to see absolutely nothing! I was fine with it-I've done the Space Needle in Seattle, so it wasn't really a big deal to not go up.

I loved the little trolley buses. This shot shows the old ones. The new ones look very much like Japanese bullet trains. I had hoped to find time to ride one, even briefly, but just didn't get to it. 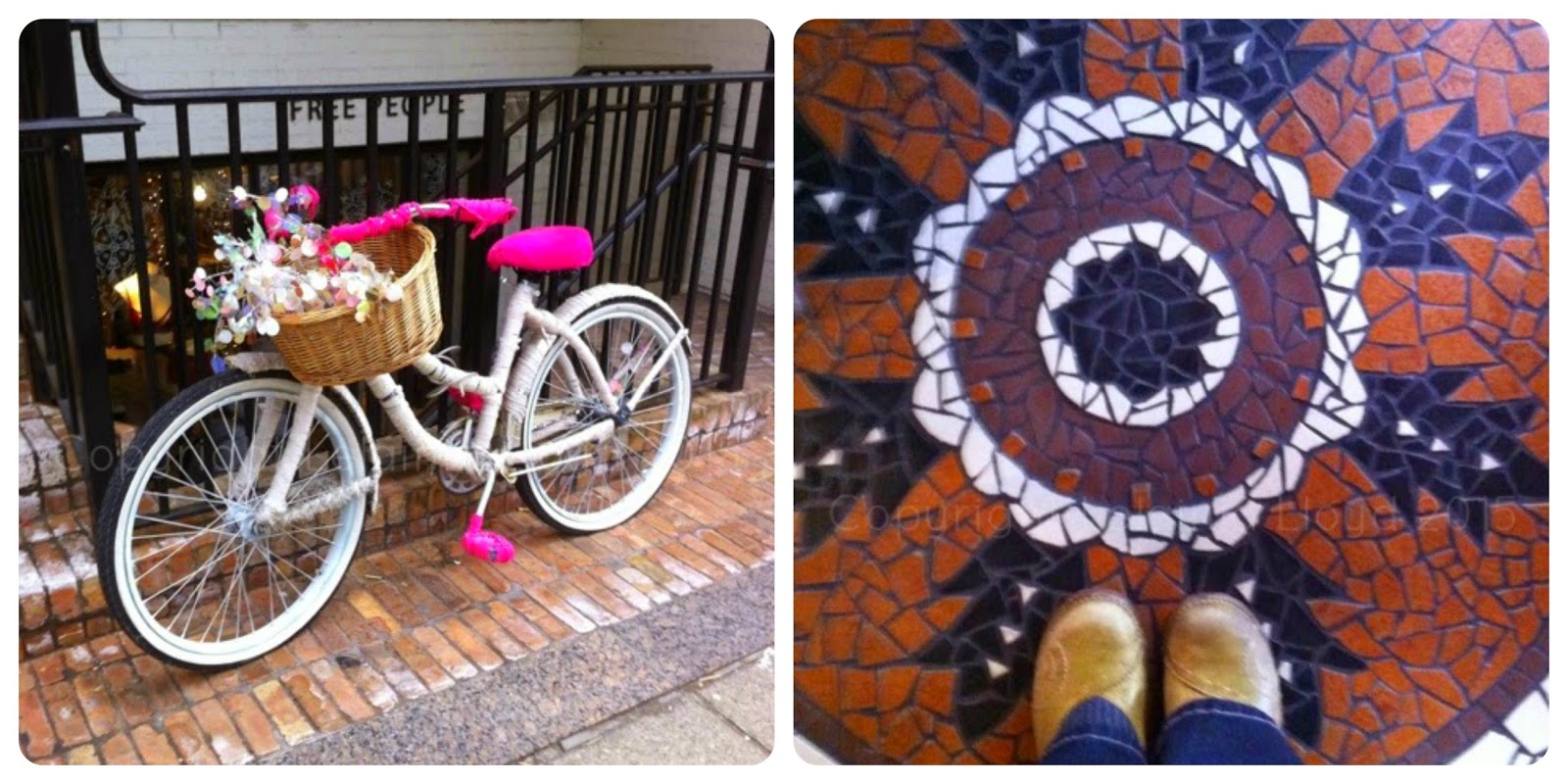 For lunch, we went to Trattoria Nervosa in Yorkville. It was a really cool Italian eatery. We ordered a traditional Italian pizza and a Caesar salad to share. The selfie (right) was taken in the entryway. I loved the medallion on the floor. The bike was just around the corner in front of one of the many trendy little shops. I had a great time visiting with Jenna and getting to know her. We'll see one another again in early March when we both fly to LA for NMO Patient Day.

Jenna dropped me off at one of the subway stations after lunch and I made my way back to the airport, just in time to get through an enormous backlog at the security checkpoint. Fortunately, I was able to go through an accessible line, which was a life saver. My flight home was rough-we had major turbulence the entire way and I didn't get out of my seat the whole time. Normally, I don't mind turbulence-that's how you know you're flying, but I was feeling a bit under the weather and so it wasn't as much fun as it normally would be. Fortunately, our flight arrived 1/2 hour early, so that kind of made up for it.

I really enjoyed my trip to Toronto. I'd never been before and that's now as far east in Canada as I've ever been. I plan to write about the actual work I was doing there for the Canadian MS Society, but it will be posted over on their site, when I do.

So...I am home now and playing catch up with various things-laundry, emails, blogging, etc. (Oh the glamour of it all!) I have a few projects in motion that need my attention. I'll be making a list first thing tomorrow morning. No rest for the wicked!