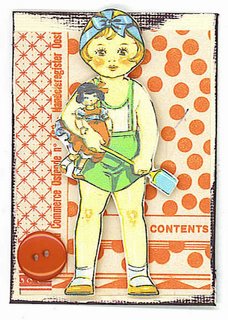 Quite some time ago, I received an email from Diana Trout asking me if I would be interested in being featured as an Artist of the Month on her website. It's been awhile since that email, but I am happy to say that September is MY TURN! If you would like to view it, you can see it here. THanks Diana! :)

In other news, I have been led into temptation by several friends in terms of cyber shopping. Anahata Katkin has some wonderful Papaya! grab bag paper packs that I just couldn't pass up. I also ordered a famed Signo pen, which I am eager to try.

Thanks to Edina, I also have some rubber on order from Green Pepper Press which I am excited about! So much good stuff to be had! 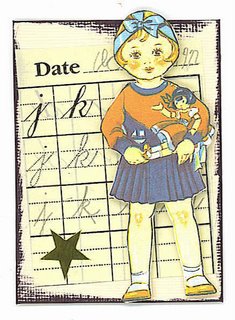 Anyway, I post these two ATCs I made ages ago in tribute to summer's last hurrah and the beginning of Autumn. (Yeah I know officially it's not the end of summer for another 3 weeks, but I consider the September long weekend the last days of summer.)
at 2:36 pm

Wow! Those ATCs are adorable!!!!! I will have to check out the blog that has you featured, how fun! and the links look like lots of fun!!

Hi Lelainia! Sorry to have been the one to tempt you with Michelle Ward's new stamps, but aren't they great? I love Anahata's stuff, too, and got some of her Spare Parts and grab bags a few months ago - fabulous! Are you coming down for Art & Soul? Or do I have to wait until ArtFest to see you again? Seems soooo far away...

hi sweetie!!
i'm back in the land of the living!! FINALLY got moved in--i am SO tired--but it is great to be in our own place!! REALLY looking forward to getting the ATC book--sounds fantastic from the emails you've sent!
hope all is well with you!
miss you lots!
liz xx

First of all...CONGRATULATIONS on being the "Artist of the MOnth"! The article was wonderful!

Secondly, my charge card and I thank you for posting this wonderful website of goodies!! I'm not sure if this is the same place where you got these great little girls that you used on your ATC's, but I loved them! I just received Stacie's calendar and saw where you had used them in there. I thought they were adorable!

These ATC's are wonderful. Love the little doll! Congrats on "Artist of the Month"....now I must go and read:-D

These are adorable!!!!!! Would you like to trade an ATC with me - I have some posted at my site...Thanks!