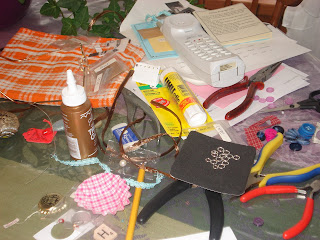 So yesterday I went out to Maple Ridge to teach a private class at Helen and Paul's farm. Helen invited me for lunch so I arrived at noon and shared their mid-day meal with them, which was yummy. Helen's husband Paul has lived on their farm all his life. He was telling me that when his grandfather bought the land it was a dollar and acre. At that time that was a mint. When Paul was growing up, adjoining parcels of land were $300 an acre, which was still steep for the times. Now land in that area is going for $100,000 or more!
After lunch, Paul went out to work on repairing one of his tractors and Helen and I got down to making a mixed media button bracelet. As you can see from the table, we had fun making a mess! 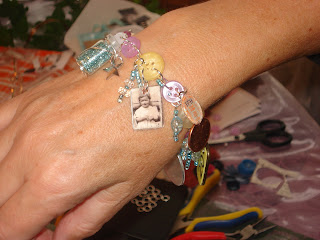 Helen did a great job and this is the finished piece. I loved all her photos of herself as a kid-they were perfect for this project and she's a natural with wire. 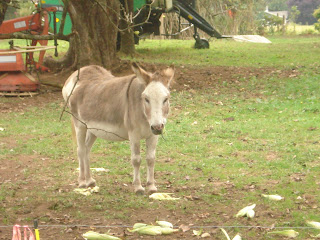 After class, I put rubber boots on and we headed outside to see the animals. They have Patches the guard donkey, two horses, goats, sheep, chickens, cows and two dogs. There are a number of old barns, (one of my most favourite things ever!) the original carriage house and a house built in 1921 with very interesting architectural features. I especially liked the scroll work on it. 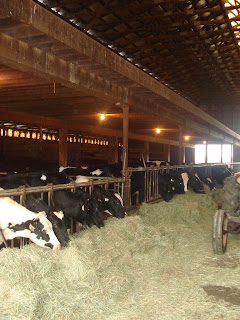 This is the new barn where the cows sleep. It's huge. In case you were wondering, it did not smell. Not at all! The barns were so clean I didn't smell a thing! The cows were in for dinner and milking at 4 p.m. Helen and Paul and their son Matt milk 40 cows twice a day and their milk is sold to Dairyland. (The big dairy company in BC.) Matt said they produce a 1000 litres a week. 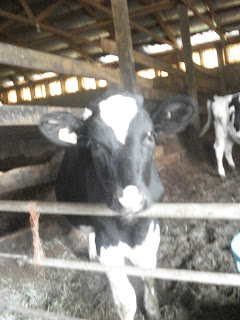 This is one of the baby cows. They are adorable. There were lots of babies and Helen said we would feed them. 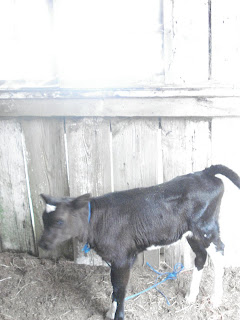 This baby I fed with a bottle (unfortunately the photos came out blurry) and it was so crazy to get the milk, it yanked the bottle out of my hands. Milk was everywhere!! (All over the calf, all over me!) I tried three times to pick the bottle up again but it was wet and slippery and kept sliding out of my hands. Meanwhile the calf was bawling and going crazy because it was hungry. Paul finally managed to pick the bottle up and I finished feeding this one.

The next one I fed, Fabio (they all have names) was fed from a pail. It wasn't the brightest critter-he kept submerging his head to the bottom of the pail and almost drowning himself in the milk. Pretty comical. I fed several more calves with pails. It was funny how some ate like little hoovers, almost knocking the pail out of my hand and others would drink so daintily. 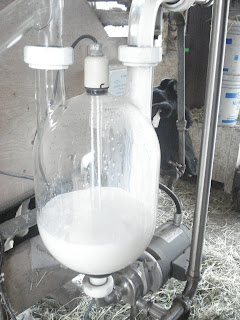 This is one of the receptacles where the milk goes after it's collected from the cows. The milking is done with machines. Helen explained that the new machines go on the cow and there's a digital monitor that shows how much milk is being collected. When the cow runs out of milk, the machine senses this and lets go. It's the coolest thing! Matt puts it on the cow and then walks away while it milks to prep the next cow in line. It takes about 45 minutes to milk 40 cows. Matt let me hook one of the cows up for milking. I was a bit nervous because earlier in the day one of the cows had kicked him in the face, giving him a wicked nose bleed and let's face it, these are BIG animals. But, not being one to shy away from learning something new, I got in there and got the job done! I asked Helen and cows are not kickers nor biters generally speaking-the cow that kicked Matt must have been having a bad day. One thing I noticed is that even though the barns were open and it was raining, it was very warm inside. The heat was coming from having all those big animals in there. 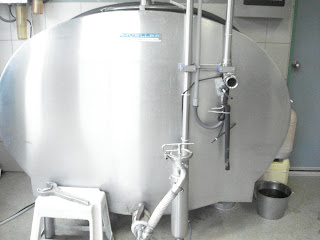 This is where the milk ends up. It's a giant refrigerated drum that cools the milk and holds 4 days worth until Dairyland comes in to pick it up. The milk is gently agitated inside the whole time to prevent separation. There is a hole in the wall of this room where the truck puts a hose through and hooks into this drum to pump the milk out. Before the milk even leaves the farm, it's tested to ensure it's safe.
After we fed all the calves, Paul asked if I would like to drive his big tractor and of course I said yes. I love tractors, John Deeres being my favourite. So I climbed up into the cab and Helen and Paul squeezed in too. Then I realized it was a stick shift and I don't drive stick. I told Paul he could do the stick and I would steer. Now keep in mind, he's facing backwards and he's shifting. It was comical! Especially since I don't have a clue how to work the clutch and let it out way too fast. *giggles* We drove down to a lower field to drop of the trailer we were pulling and then back up to the barns. It was a hoot!
After that it was time for me to head out. Paul brought me some fresh corn and a dozen eggs to take home which was very generous. Helen gave me 15 lbs. of buttons as well. WOW! You know what I will be doing today!!
It was the most lovely day. I can't tell you how great it was to be on that farm. I didn't think of a single thing except what I was doing in that exact moment. It's amazing to think you can be driving in the midst of what has become a built up residential area, take a quick turn down a partially hidden gravel road and in less than a minute are surrounded by pastoral farm land with a spectacular view of the Golden Ears mountains. It's truly a little piece of heaven.
The Laitys are a lovely family-kind and generous, warm and friendly as farm folk are. It was almost like being home in Manitoba for an afternoon, if not for the mountains. I was grinning like an idiot the whole time and I came home filthy but with a happy heart. When my husband saw the fresh eggs in my trunk he was very excited. There's nothing he loves more than farm fresh eggs. I noticed the kitchen smelled like fried eggs this morning, so he went off to work well fed!
Thank you Helen for this amazing opportunity. I had the best time and I hope you enjoyed your class. Thank you also to your men for making me feel so welcome and for taking the time to teach me about the workings of your farm. I truly enjoyed every second of it.
Today I am grateful for the unexpected doors art has opened for me.
at 6:47 am

The bracelet is adorable!
And those cows! Too cute...reading about you feeding that first one with the bottle reminds me of breastfeeding my firstborn! lol!

glad I stumbled upon your blog, love the bracelet and the cool pics.

I would say you had a great time, but it would be a "moot" point!

LOL! I could not resist, you closet farm girl, you.

Sounds like you had a great time, and I am ever so glad.

What a fabulous time on so many levels!

Wow! What a great post! I had the best time giggling along with you while have images in my head of you and those baby cows! How fun! We have chickens, but I think that's about as far as we will journey! A great Buried Treasure to share for sure! Thank you!!
Jackie ")

That's a fabulous bracelet, and the story of the cows was especially endearing. I laughed at the calf that was bawling, the one that nearly drown, and the ones that are dainty.

I also laughed that you don't know how to use a stick shift. I've never owned an automatic, and wouldn't know what to do with my unused foot (grin). Thanks for sharing this lovely buried treasure with us.