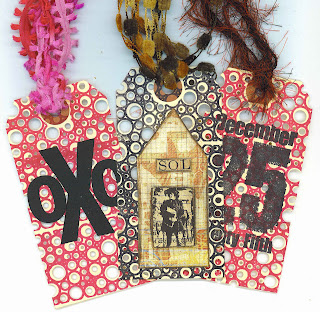 I'm back! Due to the total ineptitude of my ISP, I was without service for the last 3 days. Five phone calls later and I am finally back up and running. Why is it when you can least afford to have these things happen, they do? It's like a giant cosmic joke.

Anyway, I have been producing art, in between madly prepping for several classes. These are for Paper Artsy and use some of the newer rubber. They just came out with a brand new line called Squiggly Ink which I think will be fun to play with. Some of it is winging its way here right now! It's always fun to have new rubber in the mail. I love opening the package and seeing it for the first time and waiting for the ideas of what to do with it to just pop into my head. Nine times out of ten, I go with whatever my first impulse was to make.

You know, I discovered that my Staz-On inks keep drying up. I find this hugely annoying because they are not cheap. I keep the little plastic cover on over the pad that goes under the lid, but still, the pads go dry. I don't know if it's because of the type of ink it is or what, but when you buy one and it's dry in less than 2 months, that's not good. I have ink pads I've had since high school that are still wet! I kid you not! Maybe I need to write the company...

Today I embark on a bit of an adventure professionally. I start working on something I have wanted to do for a long time. I have a week to complete it so I will be focusing on this one thing over the next few days. Can't say much more right now, but eventually I will be able to share. It's exciting news! I have to say, 2008 has most certainly started out with a bang. Good things are happening as a result of alot of hard work and some major life changes. It's nice to know the Universe rewards intention and action. The exciting part for me is just waiting patiently to see what happens next!