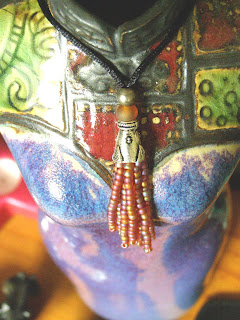 See this pretty tassel necklace? Well I had one just like it. It was a hostess gift from Deb Lewis for the 12 Days of Xmas.

Last Wednesday, I decided was the perfect day to wear it for the first time, so I put it on and then headed out for the evening. It wasn't till I was lying in bed, hours later that I realized I had not taken it off. I reached up to my throat and it was then that it dawned on me that it had disappeared. I got a very sick feeling in the pit of my stomach because I felt horrible that something that was given to me in the spirit of friendship was gone. I've never lost a piece of jewellery in my entire life!

Rather than say I lost it, I am going to think of it as my tithe to the universe, for surely whomever happens across it will see the beauty in it and keep it for themselves. Unless it was found at the facility I was at...I will ask when I am there next week and see if by some small miracle someone found it and kept it safe for me. I have my fingers crossed that that is the case, but if not, I hope whomever has it is enjoying it.
at 9:10 am