Messages: A Labour of Love

A couple weeks ago, I got an email from the executive director of the agency that oversees our local crisis line. I served on the lines from January 1998- April 2004. Our provincial government, in its infinite wisdom {insert sarcastic font here} decided in December to cut the funding for our crisis line. As a result, this vital service, which has a thirty eight year history of invaluable service to the people of this city will be closing at the end of March.

I was asked if I would help create something to honour the crisis line coordinator, who will be leaving the agency when the line shut down. Tammy Lohnes is an amazing human being and one of the finest and smartest women I know. She has been a friend and mentor to me and to hundreds of others who served under her gentle guidance over the years she's been involved with the lines. It was my extreme honour to spearhead a project to let her know just how much her contribution meant to all of us who had the pleasure of working with her.

I decided that the most meaningful way to express our appreciation for Tammy was to create a collaborative book. I designed the pages to look like phone messages and invited everyone who wanted to, emailed me their well wishes, comments and memories, which I then formatted into the pages of the book. In addition to the messages, I also included photos of the training groups, parties, award ceremonies and pictures of Tammy. 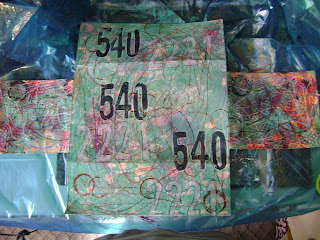 I also decided that I wanted to make a wrapping to contain the book, so I painted and stamped and sewed a couple of manila folders together to create an envelope for the book. This is the envelope in progress. 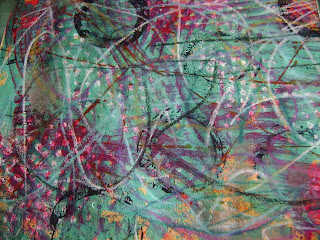 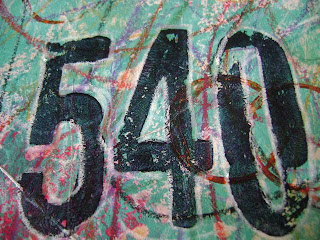 I used my foam rubber stamps to add the phone number of the lines on the envelope. 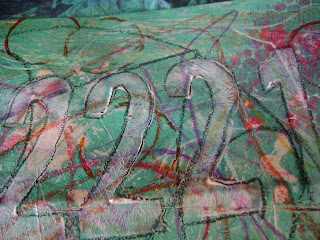 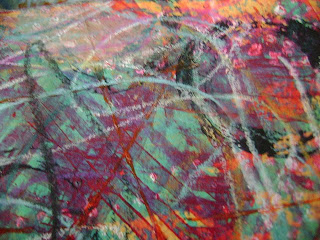 Some detail of the layers. I always have so much fun playing with paint! 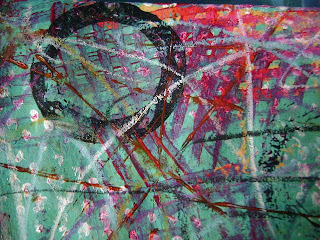 I also used some paint combs, plastic bottle tops and the like to add texture. 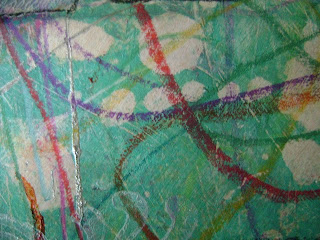 I like splashing water on the layers to remove dots of paint here and there. 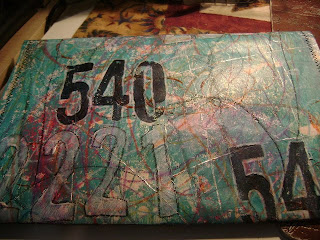 I zig zag stitched the seams with black thread. 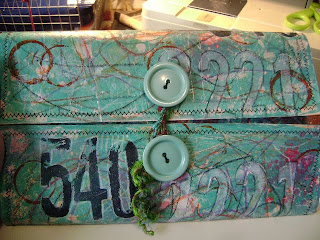 Then I added a close with vintage buttons and some silk sari fibres. 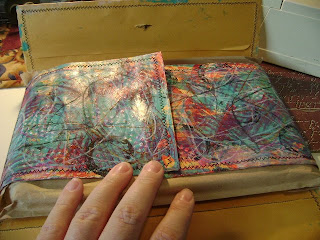 I wrapped the book in a plain paper bag to protect it from any paint rubbing off on it. 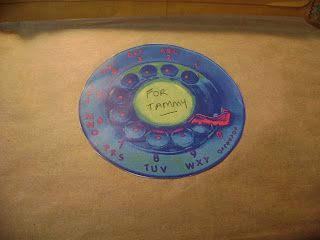 A tag glued down on the paper wrapping. 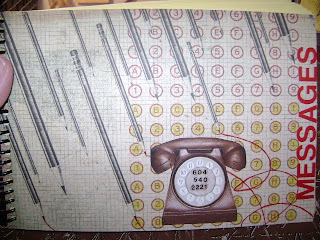 The cover of the book. I used a black coil which looks alot like a telephone cord. 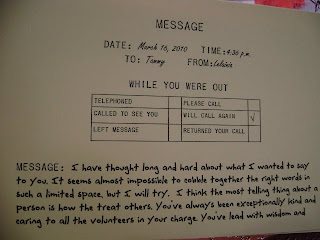 Here's a sample of one of the pages. It's actually a yellow colour paper, but for some reason, it looks white here. I chose yellow so it would look like those pads of phone message paper and I used handwriting fonts to mimic a handwritten note. 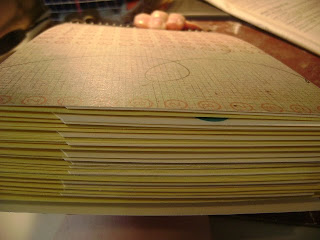 I pulled the whole thing together in 5 days flat! (Though that was working on it all day, every day for 5 days!) As you can see, it was nice and chunky. The party for the crisis line, which was a reunion of sorts was on Thursday and they presented Tammy with the book at the party. She was really surprised!

What cracked me up was that the director had absconded with the photo album so I could use the photos in the book. Tammy kept asking about it-she knew she's seen it, even had it on her desk at one point and it was driving her mad trying to figure out where it had disappeared to. She said she'd thought she was losing her mind. It was at my house the whole time!


Anyway, Tammy made a point of telling me how much she liked her gift and I am so pleased. It meant alot to me to be able to do that for her and I hope that she will take it out and look at it from time to time and remember how much we admire and respect her. She's a gem.

I wanted to update my blog earlier in the week, but i didn't want to post anything about the book till she had it in her hands because I was afraid she might read my blog. It's a good thing I held off because at the party she told me she'd been reading all about my Olympic and Paralympic adventures! Whew! Good thing I waited!

So, sadly, it's the end of an era. I will always look back on my time on the lines fondly. I met and worked with some great people there-it's where my best friend and I met and I am still close with a number of folks, even after all this time. The lines is like a family and no matter how much time passes, there is always a sense of "going home" when we're all together. I am hoping that despite the fact that the funding is gone, we'll still find ways to get together every now and again and to celebrate our legacy.

If there's anything good to be drawn from this, it's knowing that all of us go forward in our lives, taking with us the amazing skills we developed in caring for others. I know mine have served me well.
THANK YOU TAMMY! xo
at 6:23 pm

oh, it looks awesome! what a truly fabulous gift-- I am not surprised she loved it. :)