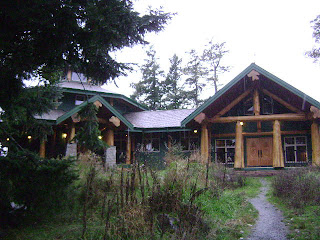 So this beautiful piece of real estate is where we stayed on the Island. It's called Cougar's Crag Extreme Bed & Breakfast and is located in Metchosin. It's definitely off the beaten track-when you arrive, you go up, up, up the drive and this jewel it at the very top.

Months ago when we decided to go away for our anniversary, I spent some time searching for just the right place. We wanted to take Indy with us, so it was important that we find a place that was 100% dog friendly. Steve, the owner of Cougar's Crag has four large breed dogs, so this was the place for us! (He has Maximus, a Great Dane and Banjo, a hound, as well as two working dogs who live with and guard his goats.)

Steve took good care of us. He's an amazing cook and our breakfasts were delicious. (We especially love the gingerbread pancakes and the world's best bacon! MMM!!) He even surprised us with a lovely bottle of wine which he left in our room to welcome us. When we travel, we always prefer to stay in a B&B-it's quieter, we get to support the local economy and we tend to learn more about the area we're visiting from the person whose B&B were staying in. We've had great luck over the years and have always had best experiences doing this. 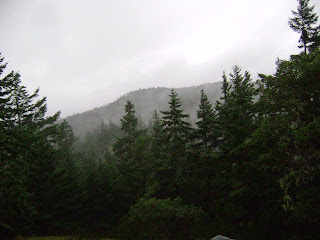 This is the view from the balcony of our suite. The whole time we were there, we were hoping to get a glimpse of a cougar. Steve said one morning at breakfast, a cougar ran right past the dining room window! No such luck for us, but we did see two baby bears in our travels, seals, quail, deer, a rare and endangered salamander, raccoons, Great Blue Herons and eagles. I think we did pretty well! 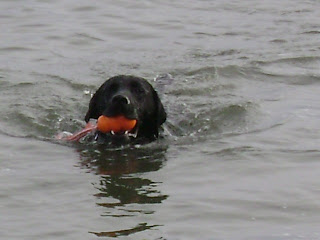 Indy was in his glory-he got to swim in the ocean and in several lakes, while visiting beaches all up and down the south west coast. At this time of year, dogs have the run of the beaches. He had a blast. Several times though, when he was in the ocean, seals were checking him out and would inch closer and closer, at which point, we would have to call Indy our for his own safety. 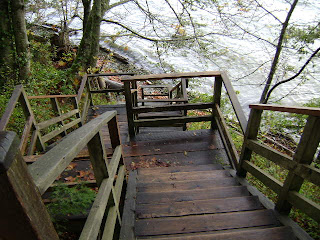 At one beach, this was the beach access-a long and slippery staircase, with barely enough room to get onto the beach-see the tide line almost at the foot of the stairs?! While it was a bit hairy going down... 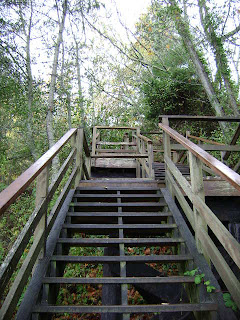 ...it was a really long climb going up, especially on tired legs after (at this point) two whole days of hiking! 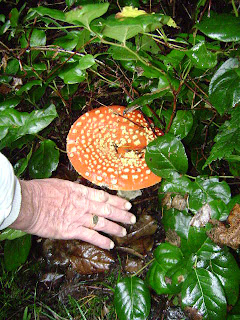 There were an amazing variety of mushrooms growing everywhere we hiked. I don't know much about them, but I plan to get a book just to see how many varieties I saw and whether they were edible or not. In the rainforest, mushrooms grow big. I asked my husband to put his hand in the photo for scale-this one was huge! Red capped mushrooms always remind me of Mary Stanley. 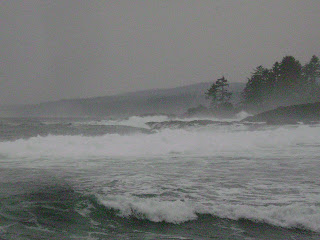 Just to give you and idea of how wild the area we were hiking in was, here's a shot of one of the beaches we landed on. We spent 3 hours in a downpour travelling through the rainforest to a series of rugged coastlines. It was the kind of hike where if someone slipped and broke an ankle, they'd be in serious trouble. This was no Sunday walk in the park!
We were wearing rain gear and had layers on and we still got soaked to the skin, but we loved every minute of it.

At one point, we were standing on this beach and I realized that in order to communicate, my husband and I were shouting at the top of our lungs.
That's how powerful and loud the ocean is in the wilds. It's both awesome and humbling. 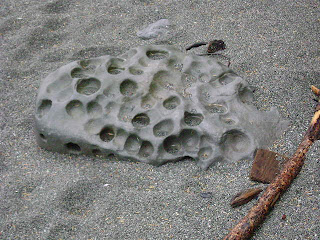 This is one of the curious things we saw-pocked marked rocks. I have no idea why they are like this, but maybe I can noodle around online and figure it out. 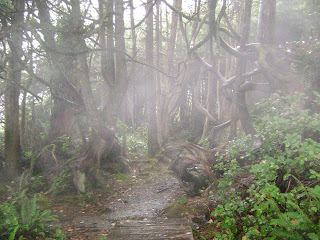 On the trail. This looks like something off of a movie set with the mist rolling through like that. Return of the Jedi, anyone? 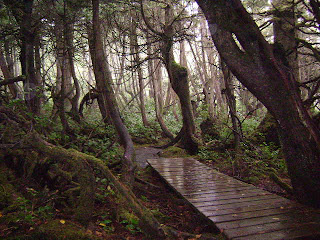 There are sections of boardwalk from time to time, I suppose to keep you up out of the mud and to protect the environment, but it's extremely slippery when wet, even with hiking boots on. I kept wondering why they didn't at least lay a layer of tread mesh across them. Like I said, break an ankle here and good luck to ya! Hiking this section was my favourite-I thought the forest looked so magical, all twisted like that and the way the light was coming through. 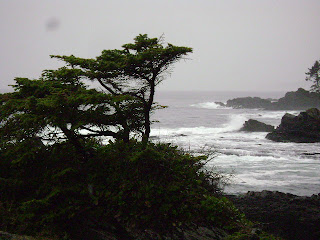 Natural occurring Bonsai in one of the bluffs. Who knew?! 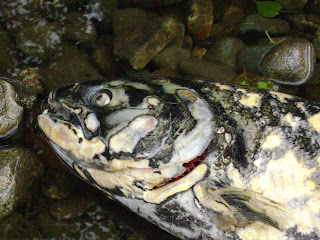 On another hike, we visited a spawning stream. We were able to go right down on the shore and see the salmon up close, including several that had come to the end of their life cycle, like this one. We didn't stay there very long because along the shoreline had short, dense brush making it exactly the kind of cover bears like.

Years ago, in recognition of the fact that I live in bear country, I took a bear aware course so that I could peacefully co-exist with nature and recognize the dangers before anything might happen. I figure your best defense is a good offense. Anyway, I kept my eyes peeled, made alot of noise and we didn't stay long.

As we were returning to our car, a man with a camera that had a huge telescopic lens on it came along and said he was out there looking for the bear. Apparently there is a female with two cubs that lives in the area and had been spotted by the river just an hour and a half beforehand. That confirmed why my spidey senses were tingling.

We did an incredibly large chunk of the Island in 4 days, which means we've now covered the Island to our satisfaction. We've seen it all now, so on our next vacation, we will have to figure out a new area to explore. There's been some talk of Portland, Oregon or taking the train somewhere. We like to do road trips, with no real plan in mind-just driving, stopping wherever we want to and discovering cool things along the way. I'd really love to go up north on the inside passage and then drive back.

We had a wonderful time celebrating our 20th Anniversary and we couldn't have picked a more beautiful place to spend it. Only time will tell where our next adventure will take place.
at 12:10 am

it looks so cool! what a great way to spend your anniversary. :)

If your interested in learning more about mushrooms, the Vancouver Mycological Society puts on events & workshops and sells books.

The Lynn Canyon Ecology Centre is offering a Finding Fungi forest tour next week, but it sold out. They may offer it again in the future.
http://www.dnv.org/ecology/special_events.html