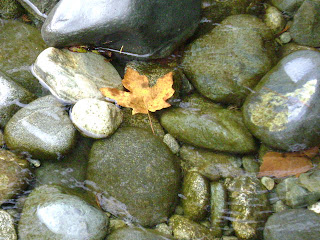 This post is in honour of my beloved Gramps, whose birthday is today, Hallowe'en. If he were still with us, he would be turning 89 today.
Happy Birthday Gramps. I miss you every single day.

My earliest Hallowe'en memory was the year my Gramps took me out trick or treating around to the neighbouring farms. In those days, we knew all the neighbours and in the culture of true Manitobans, they were all considered members of our extended family. Everyone was either an "aunt" or "uncle".

That Hallowe'en, my grandparents bought me a Bugs Bunny costume, which in the late 70's consisted of a thin jumpsuit that tied at the neck with Bugs' body printed on in, (in blue if memory serves) and a plastic mask of Bugs' face and ears held on by a flimsy elastic stapled to either side. Oh look! Here's a pic of the exact same costume!

Now if you know anything about Winnipeg and the surrounding area, you'd know that traditionally Hallowe'en night was usually pegged as the first snowfall of the season which often turns into a blizzard. It means that your choice in costumes is dictated by the weather. Either you wore a costume that was big enough to fit your bulky winter coat (or in some cases, snowsuit) underneath or you had to put your coat over top and then "flash" your neighbours so they could see your costume before they gave you candy. Fortunately, my snowsuit fit under the jumpsuit piece of my costume, so I looked like Bugs Bunny while staying toasty warm.

The farm houses were set a fair piece back from the highway, so Gramps loaded me up in the Funcraft (a sort of pre-minivan van-all the room of a minivan, minus the seats) and drove me from farm to farm. The Funcraft had a sliding door on the side, so he left the door locked open and I sat in the opening with my legs dangling out while he drove. Thinking about that now makes me laugh. Can you imagine tooling around in the dark, on a rural highway with a child of 4 sitting in the open door, legs dangling these days? Um...yeah...no...

Anyway, we drove up and down the highway, stopping at the end of each driveway and I would hop out and run up the drive to the house. I'd be almost out of breath because those were looooooog driveways, but somehow I'd manage to belt out "Hallowe'en Apples!!" (Kids in Manitoba say this, not "trick or treat". I don't know why, we just do. My husband thinks we're weird.) Someone I knew would come to the door and pretend they didn't know who I was and then dole out the candy. I of course was thrilled to be putting one over on them and the candy was just the bonus. I'd say thank you and then run back down the drive and hop into the Funcraft and we'd be off to the next house.

My quest for goodies ended with a trip to Don & Lou's house, our next door neighbours. Don & Lou had the longest drive of all. They built their house on the back end of their 5 1/2 acre property, on the river's edge, so Gramps drove me right to their front door. (Walking, it would have taken me about 20 minutes to get up the drive.) I hopped out of the van and hollered "Hallowe'en Apples!" at the house and Don came to the door. He went through the motions of pretending he didn't know who I was and teasing me before he gave up the candy. ALL of it! I loved Don.

omgosh, you're the only other person i've known to have called "Halloween apples". I was born and raised in a small town in the interior of BC....guess the provinces are alike in some strange or unusual ways. Did you actually get apples in your pillow case? I did, and they got sooo heavy...
What about "Damage night"?
Did you go around toilet papering and waxing car windows the night before too?

what a wonderful memory!!

It's wonderful to have such great experiences that keep the memory of our loved ones alive.