And Now Back To Our Regular Programming

Time to catch up! While the last few weeks have been busy with the 1 year Olympic anniversary, things are getting back to normal around here. I've actually been working in the studio again.
Creating: As I've mentioned in previous posts, I was taking Vivienne's Wading In class on self-portraits. It was a fabulous class-I met some really wonderful artists.and we had such a supportive and creative group of women that we're actually not willing to let it go! That's a sign of just how good this class was. As Vivienne said, it does have something to do with the people who were participating, but the class itself was enlightening.
I learned alot from everyone and most importantly, I learned alot about me. I think that's the hallmark of any great class-being able to take what you've learned, put your own twist on it and apply it to your own art practice. Here are a few of the images I was able to create: 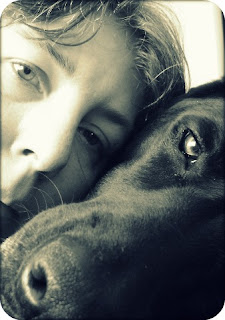 This shot of Indy and I is far and away my favourite. I love our eyes. 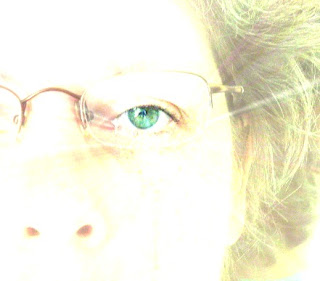 Speaking of eyes, this one came out kinda cool. (And yes, my eyes really are green!) 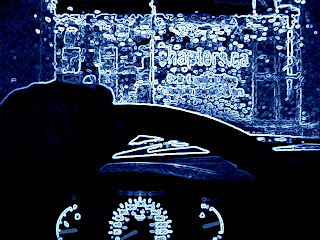 This one I shot while sitting in my car one night when it was storming. I liked how the rain looked on the windshield. (I was parked outside of Chapters.)
I played with it a bit to get this effect.
I have about 60 images I created for this class and I'm thinking about having the photos printed so I can make a photo journal for myself. I haven't decided if I will have the book professional printed or if I will do it myself...still mulling it over.
Aside from photography, I also created a mini zine on Typography for an exchange. I've put a few copies in my Etsy store. I am about to create some more wee zines because I am enjoying it so much.
Reading: I just finished John Furlong's Patriot Hearts and Cami Walker's 29 Gifts. Next up is finishing two books I started some time ago. I also have a stack of art magazines I've only paged. I usually do my reading in the evening before I head to bed but I haven't had time or energy to read for awhile now. This week I managed to read those two books, mainly because I was resting up after the celebrations last weekend.
Watching: Sadly, I am on the last season of The Shield, which I've been renting. This is the season where all hell breaks loose, so it's really good, but I will be bereft when it's all done. It's a fabulous series, which I somehow missed watching when it was on TV. How that happened is a mystery to me!
Another season of The Amazing Race starts on Sunday. YAY! I am also watching Ice Road Truckers: Himalayas and Ice Pilots NWT, which I love. Watching for Deadliest Catch and Breaking Bad to come back on. Soon, I hope!
Oh and then there is American Pickers, which I love and Storage Wars and Auction Kings, which feeds my love of antiques and curiosities. I spend most of my TV time watching the upper channels, which is where all the good stuff is.
Listening: There's been a ton of good stuff I've downloaded from iTunes lately. The Wailin' Jennys have just put out a new album in the last week called Bright Morning Stars, which is pure earcandy. My fav track is Storm's Comin'.
My new friend G whom I met through the Wading In class turned me onto Pete Murray's Opportunity. Wonderful lyrics! When I heard it, I thought it could almost be the anthem of my life. Seriously. Thanks G!
I also have recently purchased:
The Thrill is Gone~BB King & Tracy Chapman
South Side~Moby
The Call~Regina Spektor
Fast Car~Boyce Avenue & Kina Grannis
Art-Tanya Davis (go watch her video on Youtube. It's fabulous!)
Anticipating: The BC Sports Hall of Fame viewed my segment for CTV and they said want to record me speaking about my Olympic experience. They are going to get back to me about where and when. They're working on a massive exhibit on the Olympics & Paralympics. I am really excited about this-it will be wonderful to have a place for everyone to share and remember the amazing experience that was our 2010 Games. It changed our country in a way that won't soon be forgotten. It was an incredible time in Canadian history and I was so honoured and proud to be a part of it.
Dreaming: My 40th birthday is just around the corner-only 31 days left! I am hoping there's a shiny new DSLR camera coming my way. (I am currently working with a very crappy point and shoot, which is dying in fits and starts. Let's just say it's not pretty. *cough*Sony.)
Since taking Viv's class, I've realized that I want to explore and expand my photography skills. I think with some time and effort, I could become good at it. I definitely want to continue shooting self portraits. I think it's important to document your own life by actually being IN the photos and I think it's important to see yourself.
Speaking of 40th birthdays, I guess I should consult my 40 Things Before I'm 40 list and see what's left. Maybe I can cross a few more things off in the next 31 days! It's been an exceptionally productive year.
***
If you entered my Olympic giveaway, and haven't already done so, please email me with your snail mail addy so I can send you your prize! tatterededge {at} shaw {dot} ca. If you've already emailed me, your prize is on its way! Keep your eyes peeled!
at 7:57 am

Hey Lelainia - thank you so much for your support and for entering my giveaway! Am back in possession of my laptlop (YAY!) and catching up with three days of missed internet (frightening how much you CAN miss in three days!)