In Good Times & In Bad 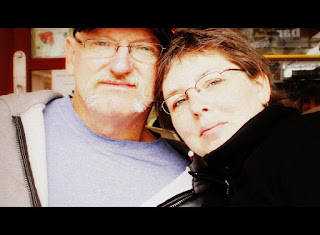 I don't usually share really personal things on my blog, but this is a pretty big deal in my life right now.

Today, my husband and I are celebrating 22 years of being happily married. This year's anniversary is especially poignant because just 7 weeks ago, we were blindsided by his diagnosis of kidney cancer. It was caught pretty much by accident during a routine yearly blood test which came back every so slightly off and required follow up testing. We never thought it was anything serious, so getting that news was (to say the least) a complete shock, that left us reeling.

We were quickly swept up into a frenzy of additional tests and appointments, which revealed a sizable tumor. The upshot of it all is that in less than three weeks, my husband will undergo surgery to remove his left kidney and will be off work for at least 6 weeks. Kidney cancer is rare. It's also very sneaky-usually there are no symptoms and by the time they find it, it's spread. In my husband's case, they believe he's had cancer for at least 3 years.

It's pretty sobering to face the uncertainty of the fate of someone you love so much. In fact, it's terrifying. I've felt like all the air has been sucked out of my lungs. Fortunately, we have dear friends who have circled their wagons for us. Their support means everything. As scary as this is, I know they've got our backs and that's immensely comforting.

We've been joking that we believe we got this "in sickness and in health" thing down pat. We'd like to NOT have to revisit to the whole concept any further- we've been there, done that, got the t-shirt, thank you very much.

Twenty-two years together will stand us good stead. We've been through bad times and survived. We will rise above. Together.

Happy Anniversary to my love.
I am grateful for every single second of our lives together.
Forever & always.
xox
at 6:00 am

Keeping you and your husband in my prayers.

I am so very sorry. You have already been through so much. Isaiah 40:31 is my verse. They that WAIT upon the Lord shall renew their strength, they shall rise up with wings as eagles, they shall run and not be weary, they shall walk and not faint.

Huge happy anniversary wishes for you two Lelainia. Thinking of you all daily. Big love!

Happy Anniversary to you both! I wish you many, many more. I'm thinking all the good thoughts for you two.

Happy Anniversary - you two make such wonderful couple, L. Keeping y'all in my thoughts and prayers. Hang in there! xo

Thinking of both of you! Enjoy every moment of your anniversary celebration!!

Praying for a full recovery for your dear hubby Lelainia, health and wellness for you both, and for your continued shared joy and love.
Please let me know if there is anything I can do for you.
BIG hugs,
Dawn

I'm holding you and your husband in my prayers, Lelainia.