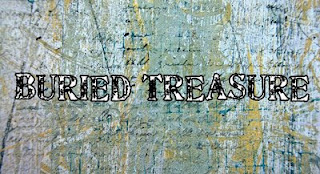 Today I'm participating in Seth's Buried Treasure collaborative. I chose this post because it made me laugh and it's a good reminder that no matter how well intentioned you are, there are always going to be people who just don't "get it".

So you know that assemblage I made last week to send to my Gram for Mother's Day? Well she got it and she called me this evening. First she asked me when she had given me the photos that I used. I told her about 9 years ago. Then she chided me for forgetting to write one of her sister's names on the border of the photo. I told her she had written the names on it years and years ago and I had just colour copied it to use in the piece. She told me she didn't remember that and then said she was mad at herself for forgetting one of her sisters. Then she goes on to tell me that stuff inside the assemblage is all loosey goosie and floating around. She tells me she was shaking it so she could see all the stuff inside and this folks is where I almost lost it.

You see, apparently, assemblage art is completely lost on her. She wasn't sure why I had put things inside the shadow box. I guess she didn't get that it was symbolic of things related to her childhood and our family...and yet she loved it. The part that really got me though was the shaking. I mean I wrote FRAGILE in big huge letters on the parcel. I had carefully wrapped it so the glass wouldn't break. I glued each piece inside the shadow box with the utmost care so it would stay intact. What I didn't count on was my Gram thinking it was some sort of toy under glass that you rattling the living hell out of. Thinking about it makes me nearly pee with laughter. Here I thought "Oh I have made a really cool piece of art." and that it would be treated with a sense of reverence because it's personal and therefore special. Guess again! That's my Gram-shake it, break it and hang it on a wall!

What a hoot!! Gram turned it into a piece of "performance-art"!! Sounds like something my grandmother would do!! Thanks for sharing this!!

I remember this post from long ago and enjoy reading it as much as I did then. Don't you wonder what has become of your present? What an adventurous life you live, my friend.

Thanks for the laugh! I think I feel better now about all the things my mom just used to stick to the fridge with magnets.

aw, it's the thought that counts, isn't it. Cute!

Funny-the "and what do you do with it" comment comes to mind (for those that don't "get it."

Gosh brings back memories - but you know what, you sure miss them when they're gone.

Your Gram is great. I love this story. Thanks for sharing.