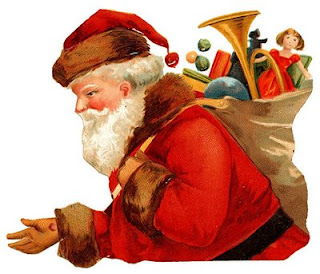 Years ago, my Grandparents came out west and moved to a small town in the mountains, on a lake. When I say small town, picture 10 streets, a general store that was also the liquor commission and post office all in one, a 9 hole golf course and a doctor's office.

This small town grew up around a mine and was full of characters. The town's doctor, Dr. S, was an odd duck. She cared for her patients, but beyond the office, in my experience, she was not friendly. When I'd visit my family, I'd often run into her in the General Store and me being an outgoing and polite person, would greet her with "Hello Dr. S, how are you?" Not once would she say hello back. It seemed rather rude.

This small town had lots of local activities and traditions, some of which I participated in when I was in town visiting my family. One year, the town organized caroling and my husband, son and I joined in. As the evening wore on, we found ourselves at Dr. S's house. Someone knew her favourite carol, so we started singing it. The lights were on in her home and we could see her clearly through the window. Unlike everyone else on our route, she did not come to the door to greet us. She didn't acknowledge us at all! Instead she disappeared into a back room and eventually, we gave up and moved on. From that point on, I really didn't like her.

One year, about 2 weeks before Xmas, my Gram got a call from a neighbour asking if her great grandson (my son) would be in town for the holidays and if so, how old he was. She told them yes, we were coming and her great grandson was 4. When we arrived, Gram took me aside and explained that the town was having a Santa and he would be bringing gifts to all the kids in town on Xmas Eve.

The next night, which was Xmas Eve, the phone rang and we were told to keep an eye out for the Santa-he was on his way. We quickly bundled my son up in his snowsuit and sent him outside to build a snowman, keeping an eye on him through the window. A few minutes passed and then an amazing thing happened: A horse drawn sleigh, pulled by two beautiful Clydesdales, their harnesses covered in bells, came up over the hill, rounded the corner and stopped in front of the house. Santa hopped out and grabbed his pack. He greeted my son, asked him if he'd been a good boy. (He said he had.) Santa dug into his pack and handed him several gifts. Then he hopped back into his sleigh and was off.

My son came flying into the house, eyes wide as saucers, hollering "Mummy, Santa come!" He told us the whole story of Santa coming in his sleigh (he didn't know we were watching from the window) and showed us the gifts with his name on them. We told him he could open them. Inside was a ship in a bottle, some candy and chocolate and an animal calendar. He was thrilled. For all of us, that moment was golden, filled with the magic and wonder of Xmas, as seen through the eyes of a child. It's a memory we will always treasure. The Santa continued to come, year after year, always bringing joy and gifts to the children.

Several years later, in February 2006, tragedy struck. An elderly gentleman was driving Dr. S home, along the twisty, snow covered mountain roads when his truck slid off the road and plunged down an embankment towards the lake. As the truck plunged downward, it struck a tree, which snapped on impact, falling on top of the roof of the truck, killing Dr. S instantly. The driver was badly injured, but he survived.

After that, the Santa stopped coming.

What no one knew until well after she was gone was that Dr. S was the one behind the Santa. Her husband had died several years before of cancer and she had no family in Canada of her own, so somehow she came up with the idea to buy gifts for all the children in town. She hired the man who owned the horses (they were logging horses) to be the Santa and deliver her gifts anonymously.

What I do know is that Dr. S tirelessly served her community for over 20 years and deep down, she had a kind heart. It's that heart that led her to create magic for my son and all the children in her little town and because of her, our family will always have beautiful memories of our Xmases there.

Someday my son will tell his children about the Santa who visited him by horse drawn sleigh, in a tiny snow covered town in the mountains, on a lake and in this way, her memory will live on.
at 8:00 pm

You made me cry. What a beautiful story...thank you so much for sharing it. <3

what a beautiful Christmas story of sharng and caring of the secret Santa ..thank you

This was a beautiful story. One that will live on and on. This is the type of story that makes a family. Sounds like you have a wonderful one.

RIP, Dr. S. Poor, tortured soul. I like knowing that crabby, unpleasant people have a nice side - even if I don't get to see it.

I remember your telling me about Dr. S - you do weave such wonderful stories. Just goes to show - we don't always know the souls and minds of others. Thank you for reminding us that all hearts are tender - whether we are young or old.